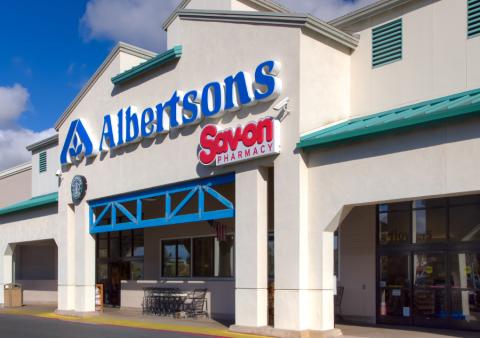 Albertsons Companies managed to pull off its initial public offering on Friday, June 26, but investors did not give the $62.4 billion company the welcome it had hoped for.

Shares priced at $16 closed down 3.4% to end the first day of trading at $15.45, which is a notable drop consider the company’s lengthy IPO process and the support of some of the biggest names in investment banking bringing it to market. The company had reduced the size of the offering to 50 million shares from 65.8 million shares and also reduced the offer price from a range of $18 to $20 provided on June 18.

Albertsons CEO Vivek Sankaran also made several media stops on Friday, including an appearance on financial network CNBC where he described the volatile market conditions that served as a backdrop for the IPO.

“It is so hard to predict what is happening in the market anymore. It is so different from the beginning of the week to the end the week,” Sankaran said during an interview with host Carl Quintanilla. “We’re just proud that in this extremely difficult environment, in the middle of a pandemic, we were able to IPO the company. It was a great accomplishment for us and we are looking at the long term.”

The offering came on a day when shares of Kroger declined slightly to $32.68 and Walmart was down $1.28 to $118.32. Meanwhile, Sprouts Farmers Market and Weiss Markets were both up slightly on the day, but have been big winners since the start of the year, up 27.4% and 20.8%, respectively. However, the big winner in food retailing this year is SpartanNash. Its shares closed Friday up nearly 3.7% to $21.46 and are up 49.5% on the year.

As for Albertsons' IPO experience, the reception it received was dramatically different from that of Grocery Outlet Holdings Corp., which went public roughly one year ago. It initially priced its offering of 17.2 million shares at a range of $15 to $17, but it increased the price to $22 on June 19, 2019. The company has been a winner for investors and closed Friday at $39.40.

The Albertsons IPO ends a five year long odyssey that began the year after Albertsons and Safeway announced their merger in 2014. The combined company tried to go public in 2015, looking to raise as much as $1.6 billion, but then pulled the offering amid undesirable market conditions. In 2018, Albertsons attempted to go public by acquiring Rite Aid Corp. in a $24 billion merger, but the companies eventually abandoned the transaction.

Last month, prior to pricing of the offering being revealed, Apollo Global Management Inc. and a group of other investors announced they had acquired $1.75 billion of convertible preferred shares in Albertsons Cos., representing a 17.5% stake in the company.

Albertsons received none of the proceeds from the IPO as the selling shareholders were all various private equity firms who will continue to hold roughly three fourths of the company’s outstanding shares.