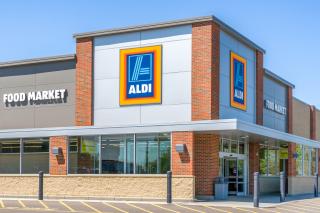 Aldi, the discount grocery retailer, is developing its own online shopping platform that will allow its consumers to order groceries without using a third-party platform.

The news was announced by Spryker, a service provider that helps retailers build their own e-commerce platforms. Aldi and Spryker in a joint release said that the forthcoming platform would allow customers to place orders for delivery and curbside pickup.

“Our partnership with Spryker will allow our shoppers another way to access the incredible value they expect from Aldi,” said Scott Patton, VP of national buying at Aldi, in the release.

The companies in the joint release said the platform was currently being tested with a limited number of customers, but they said Aldi planned to roll it out across the U.S. in a “phased approach.”

Aldi has so far provided few details about when the broader rollout will occur and whether the new service will impact its partnership with its delivery partner Instacart, which currently fulfills online orders for the grocery chain.

Instacart has long been the delivery and in-store pickup partner for Aldi — the two brands first linked up in 2017. A year later, Aldi and Instacart expanded the partnership to 35 states and to major cities, including New York City, San Diego, Raleigh and Minneapolis. Patton in a statement told Retail Leader that shoppers who were not part of the current test could continue to order delivery or curbside pickup through Instacart via Aldi’s website.

Grocers and other retailers expanded partnerships with third-party services, like Instacart and Doordash, to offer same-day delivery during the COVID-19 pandemic when customers looked for alternatives to in-store shopping. While the services have remained popular, they’ve fallen from their peak in 2020. ​​Around 63.6 million households in September placed at least one online grocery order, down about 1% compared to the same month last year, according to data from Brick Meets Click/Mercatus’ Grocery Shopping Survey.

Aldi is aiming to be the third-largest grocery retailer in the U.S. by the end of 2022 following an ambitious expansion plan this year to open 150 new locations in the country. The grocer, which is based in Germany, has opened more than 1,000 stores in the U.S. during the last decade, as Retail Leader previously reported. Aldi has 2,200 stores across 38 states, and its U.S. headquarters is located in Illinois.

It has become more popular in the U.S. as the grocer focuses on keeping prices low and selling its own branded products along with a discovery shopping experience for consumers with its Aldi Finds. According to the data firm Dunnhumby’s 2022 special inflation report, Aldi joined Market Basket and Winco in the top three as the second-most preferred grocery retailer as consumers battle economic pressures, including inflation.