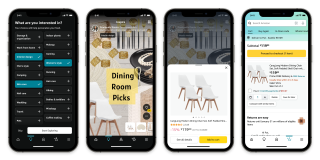 Amazon is launching a new interactive shopping experience that enables shoppers to purchase products seen in videos created by influencers, customers and brands.

The retailer in a Dec. 8 email to Retail Leader said the new platform — called Inspire — would launch to select consumers in the U.S. sometime in December with it launching widely in the U.S. in the coming months.

The platform will be built into Amazon’s existing app. The retailer said that when shoppers click the lightbulb icon in the app’s dock, they’ll be prompted to select interests from a list of 20 that include makeup, pets and gaming. The Amazon app will then create a feed of photos and videos that feature products that shoppers can purchase without leaving the Inspire section.

Amazon said the feed will learn more from shopper behavior and continue to be customized as its customers use it. The e-commerce giant promised it would update the platform as it rolls out, adding more “shoppable features, in-app functionality and content” to make the experience even more immersive for consumers. The feed will include content created by brands, influencers and other Amazon customers.

“We invent every day to make shopping easy and fun,” said Oliver Messenger, director of Amazon Shopping, in a release. “Inspire is our new shopping experience that connects Amazon customers with shoppable content created by other customers, the latest influencers, and a wide range of brands. In just a few taps, customers can discover new products or get inspiration on what to buy, all tailored to their interests, and then shop for those items on Amazon.”

The new scrollable feed bares a resemblance to TikTok, which is in the process of expanding its e-commerce business in the U.S. The social-media giant, which is owned by the Chinese company ByteDance, reportedly plans to use the platform to compete with other major e-commerce retailers, like Amazon and Walmart. The feature is called TikTok Shop and is a separate tab within TikTok’s app. Testing began in the U.S. in November, and the shopping platform has already been in use in the U.K. and seven countries in Southeast Asia.