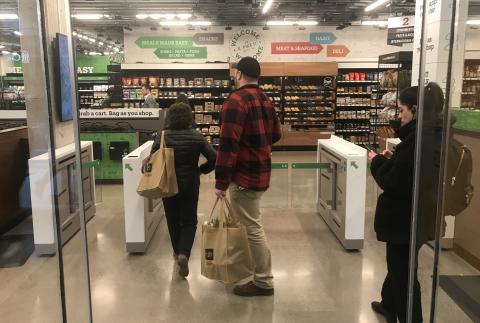 The technology that lets shopper select items and just walk out of Amazon Go stores is being made available to other retailers.

Amazon operates 26 stores with what it calls “Just Walk Out” technology that involve shoppers opening their Amazon Go app to scan a code that permits access to a store. Once inside, vast arrays of ceiling mounted cameras identify items the shoppers remove from shelves, or put back, so they can be charged correctly.

“Born from years of experience at Amazon Go, Just Walk Out uses a combination of technologies to eliminate checkout lines,” according to Amazon. “We now offer retailers the ability to leverage this technology in their stores to help bring fast and convenient checkout experiences to more shoppers.”

The first Amazon Go store opened in early 2018, and since then Amazon indicates on its web site that, “many retailers have expressed an interest in offering similar checkout-free shopping experiences to their customers.”

All current Amazon Go locations are in densely populated urban areas and until recently measured less than 2,500-sq.-ft. In late February, the company opened its largest location to date with its first-ever Amazon Go Grocery store. At 10,000-sq.-ft., the concept is more comparable in size to a Walgreens or CVS Health stores than a typical supermarket, but it does show the technology can work in an environment with an expanded product assortment compared to what was offered in earlier iterations of Amazon Go.

Relatively few details are offered on an Amazon web site devoted to Just Walk Out, but the company does explain the system operates off a credit card and can be installed in as little as a few weeks. No details are provided on cost.