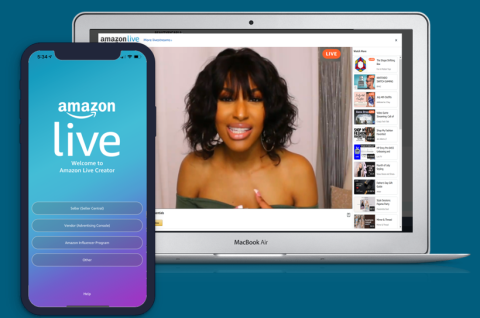 Amazon and other retailers are hoping to build new revenue streams via live-streaming commerce.

A new Amazon program could help boost a fresh form of online and mobile retail — one that’s been growing during the pandemic and could attract younger consumers once it subsides.

Amazon in recent days has opened its door wider to “live-streaming commerce” by letting its Amazon Influencers create live video streams on the Amazon platform and earn commissions from product sales (akin to affiliate and social media marketing, which are themselves just updated versions of word-of-mouth selling). Amazon launched its influencer program in 2017 and had previously allowed participants to earn money via the sales of Amazon products on Facebook, Twitter and YouTube. Now, Amazon’s live-streaming influencers can even gain what amounts to their own Amazon storefronts via the new program.

The Amazon website announcing the new program gives a sense of the potential appeal of living-streaming commerce.

“Amazon Live takes the fun and interactive nature of live video and joins it with online shopping,” Amazon touts. “Bring your product picks and recommendations to life by featuring them in your product carousel. Features like product highlighting, live promotions and chat help you engage with your audience during your streams.”

The idea, of course is to make retail into something more than some humdrum online shopping trip, itself a larger, pre-pandemic trend in commerce over the past few years. The trend promises to get more intense over the new few years.

Some of the reasons?

Augmented reality and other mobile and online shopping technologies keep getting better, and younger consumers all but born into a digital world are gaining more earning power while expecting retail experiences that are entertaining and deeply satisfying. Such factors could help make live-streaming commerce into a larger force.

The emerging retail concept of live-streaming commerce is defined by eMarketer as "a form of online shopping that is interactive and takes place in real time and is creating new and innovative ways for brands and retailers to connect with consumers.”

Basically, this form of commerce has merchants, influencers and celebrities operating, well, a live stream video feed during which participants feature and recommend products that might match sellers’ hobbies or other areas of interest and expertise. Fashion and cosmetics are common to live-streaming commerce — make-up tutorials, for example, offer a prime stage for online selling — but it can encompass a wide range of goods, even items as offbeat as goblets, chalices and drinking horns, as is the case with one recent Amazon-hosted video.

Even as Amazon seeks to grow its live-streaming commerce presence — last year it quietly debuted its own Amazon Live service — the U.S. stands far behind with this form of retail, at least when compared to China.

In that country, live-streaming commerce generated some $61 billion in transactions in 2019, according to analysis firm iiMedia Research Group. The revenue looks likely to top that mark in 2020, especially given pandemic lockdowns. It also helps that China offers vast and tightly-wound mobile commerce ecosystems that support live-streamed commerce and which can offer virtually frictionless payment options to online consumers.

“China is the undisputed world leader in combining live streaming with online shopping,” reads one analysis. “More than 100 million viewers in China are watching a live online video event every month. The livestreams take place within the e-commerce platforms enabling followers to purchase items they see immediately within the same app.”

Even so, Chinese mobile commerce and related innovations are increasingly spreading to other parts of the globe — following the growing number of Chinese tourists travelling abroad (at least before the pandemic), reflecting the middle- and upper-class consumer habits of China’s international students, and offering China-based e-commerce to consumers in other countries.

As well, Amazon is not alone in trying to offer more live-streaming commerce. Facebook has taken a shot at the retail tool — mainly via tests, it seems — and smaller retail operations are also trying to use it to their advantage. For example, a U.S.-based “virtual styling” startup called Glamhive offers consumers the services of a stylist via live-streaming technology and methods. Online retailer Wayfair, too, reportedly has experimented with live-streaming commerce.

A serious, sustained effort at live-streaming commerce in the U.S. will not only require more retailers offering the tool — and more consumers finding it appealing. Also required is a larger live-streaming host ecosystem, as China has. Engaging in live-streaming commerce is hardly a guaranteed path to riches for most participants — that is, people like the Amazon influencers. Still, the trend seems promising enough to pay attention to, especially if Amazon and other players report some early success.