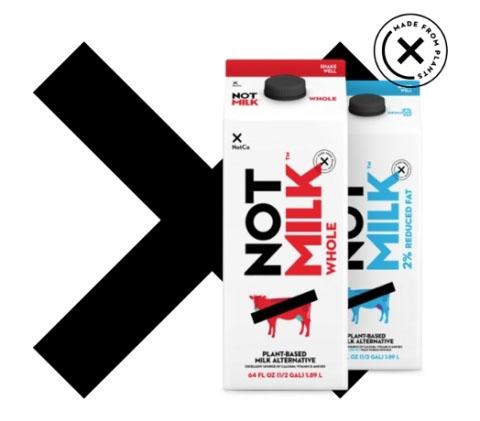 The plant-based milk, aptly named NotMilk, was developed by NotCo, a food tech firm based in Latin America. The taste and texture of the beverage replicates dairy-based milk, according to the company. NotCo said that it has proprietary artificial intelligence and machine-learning algorithms that help mimic animal-based foods using plant-based ingredients.

“When you think about the taste of milk, a human mind would never think that a combination of pineapple and cabbage could recreate the taste of milk, but Giuseppe – our artificial intelligence – can and does," said NotCo CEO and founder Matias Muchnick. “That’s the power of introducing a new technology into an obsolete system: You’re adding a whole new world of innovative possibilities that are good for us and the environment."

Lucho Lopez-May, CEO of NotCo in North America, noted: “We know 33% of plant-based milk consumers in the U.S. move back to dairy because of compromises in taste. We are here to change that. There are many options in the market, but they miss something – whether that be look, taste or texture – but NotMilk has it all."

Before coming to NotCo, Lopez-May spent 15 years at Paris-based Group Danone, where his last role was president, strategic growth channels. From August 2019, he was CEO and partner for Miami-based Garland Food.

“At Whole Foods Market, we are always looking for high-quality products for our customers, and there is a desire from our customers for a product like NotMilk that delivers the taste of dairy milk, but is plant-based,” observed Parker Brody, senior global category manager at the Austin, Texas-based food retailer.

NotCo recently revealed an $85 million Series C round with investors including Bezos Expeditions, Future Positive and L Catterton, as well as follow-on investment from all previous-round investors. It plans to open a new office in New York to host its commercial operations while maintaining its machine-learning team already partly hosted in San Francisco.