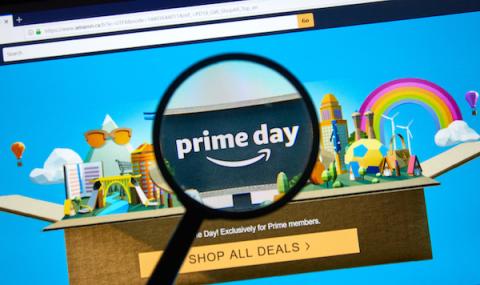 Total online sales rose 8.7% compared to the first day of Amazon’s Prime Day in 2020, making June 21 the biggest online sales day of 2021 so far, according to data from the Adobe Digital Economy Index. By comparison, sales on Thanksgiving 2020 reached $5.1 billion.

Big figures were expected for Amazon’s Prime Day, as consumers are feeling more confident and ready to spend while the COVID-19 pandemic situation improves in the U.S. Amazon’s Prime membership, which offers fast, free shipping as part of its benefits, recently hit a new milestone--200 million members--further solidifying the e-retailer’s dominance.

Prime Day, which spanned June 21-22 this year, was also met with similar sales deals from competitors Target and Walmart.

Large retailers with $1 billion-plus in annual revenue were the big winners of the day, reporting a sales lift of 28%, compared to smaller retailers (less than $10 million in annual revenue) that reported a 22% lift in online sales. Compared to the first 20 days of June, the average order value was up 2.6% on June 21, while the average value of an online basket checked out that day reached $180. 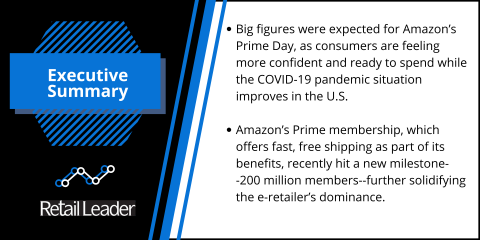 “The first day of Amazon Prime Day delivered effective gains for both large and small retailers, while also becoming the biggest online shopping day in the U.S. so far this year at $5.6 billion,” said Jason Woosley, vice president of commerce product and platform, Adobe. “Overall, the first day of Prime Day successfully accelerated spending momentum for U.S. e-commerce to new heights, in an online retail environment that is already experiencing elevated level of growth due to the pandemic.”