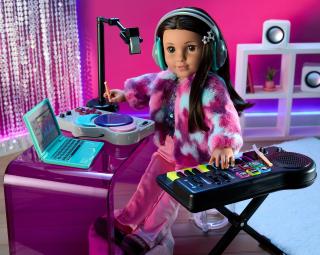 American Girl unveiled its 2023 “Girl of the Year,” a new doll named Kavi Sharma that includes a new line of accessories and virtual experiences through the retailer’s “virtual museum.”

The new doll was announced in a Dec. 29 press release. The physical product line — including the 18-inch doll and other accessories like clothing, a mini keyboard, a folding stage and vanity — became available at American Girl stores across the U.S. on Dec. 29 and at American Girl’s boutique locations inside select Indigo and Chapters stores in Canada on Jan. 1, the release said.

The retailer in the release said the 2023 doll is part of the brand’s commitment to “represent a wide range of backgrounds to reflect what it means to be an American girl today.”

“As we ring in a new year, we’re excited to have Kavi Sharma take center stage in our popular Girl of the Year lineup,” said Jamie Cygielman, general manager of American Girl, in the release. “Just like all our beloved characters, Kavi’s culturally relevant and aspirational stories help inspire kids to shine bright in their own way and be proud of who they are.”

For this year’s doll, the retailer partnered with Varsha Bajaj, author of novels “Thirst” and “Count Me In,” to create Kavi’s story, which will come in an illustrated paperback journal and in a novel titled “It’s Showtime,” which will be released later this year. American Girl also worked with a team of advisors to build Kavi to ensure authenticity and accuracy, the release said.

“Kavi’s story is important to all the young readers who will see parts of their lives represented,” Bajaj said in the release. “I took immense delight in showcasing slivers of Indian culture, including dance, yoga traditions, food, clothing, and magical festivals like Diwali and Holi.”

American Girl shoppers can also learn more about Kavi and other American Girl dolls using the retailer’s virtual museum experience, which is free and will allow consumers to watch videos and interact with items. In Kavi’s virtual area — a backstage dressing room — consumers can watch an animated performance or click on items to learn about how they relate to Kavi. The virtual museum also includes games and a virtual gift shop where consumers can purchase physical products or add them to a wishlist to buy later.

American Girl also uploaded several videos to its YouTube channels about Kavi, including a six-episode animated series, according to the release.