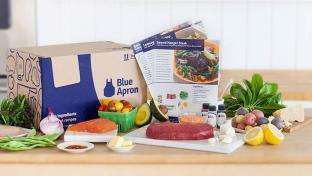 Blue Apron is offering a festive culinary experience that is meant to pay homage to the Big Apple.

Blue Apron is offering a festive culinary experience that is meant to pay homage to the Big Apple.

According to the company, the "Blue York City" experience will include tastes of Blue Apron recipes that were inspired by three neighborhoods: Little Italy, Manhattan; St. Mark’s Place, Manhattan; and Sunset Park, Brooklyn. During their visit to “Blue York City,” festival attendees can also interact with chefs from the Blue Apron Culinary team, watch cooking demos, and enter a sweepstakes for a chance to win an exclusive cooking experience at the Blue Apron Test Kitchen in Williamsburg, Brooklyn.

"We created ‘Blue York City’ to celebrate the many flavors and foods that have inspired our culinary team as they craft Blue Apron recipes for home cooks across the country,” said Michelle Chiu, Vice President, Brand Experience, Blue Apron. “All of our brand activations center around a goal to build and deepen relationships with consumers. We are excited to meet with the thousands of attendees at the New York City Wine and Food Festival, who are as enthusiastic about food and wine as we are!”

The news comes shortly after the company’s Chief Executive Officer, Brad Dickerson, offers his ‘food for thought’ to the University of Akron (UA). Dickerson, a 1987 UA graduate, told the students that, like him, they aren’t going to be able to rely on having Ivy League credentials. Rather, they are going to have to be the underdogs who work harder, he said.

Take advantage of “having a chip on your shoulder, being an underdog ... the word here is humility,” Dickerson said at the 2018 Goodyear Executive Leadership Forum. Humility is one of “the top five attributes,” he said, that he has come across in great leaders in his 31-year career, including 11 as a top executive at fast-growing apparel company Under Armour, according to the Akron Beacon Journal.

“The Top 5” was the title of his talk at at UA’s Jean Hower Taber Student Union. The other five attributes: self-awareness, passion, empathy and accountability.

“The really great leaders ... they don’t take themselves too seriously. Yet, at the same time, they have this chip on their shoulder that they know they’ve got to work hard,” he said. “They’ve got to drive results, they’ve got to be something extra.”

The Blue Apron recipes that will be featured at The Grand Tasting include:

On the featured recipes, Adler said, "Each of the recipes we are featuring were developed in partnership with our amazing suppliers, such as the custom-made lean chorizo from Syracuse Sausage and the pizza dough from CH Guenther in our calzones. These are just two of the many ingredients we have developed in collaboration with our network of suppliers so that we can deliver the best possible cooking experience to our customers every week.”

“While at the New York City Wine and Food Festival, we are most excited to celebrate some of our favorite neighborhoods in New York alongside chefs and vendors whom we greatly admire,” said John Adler, Head of Culinary, Blue Apron. “While Blue Apron is a national company, New York is home to our culinary team and a city from where we draw so much inspiration!"