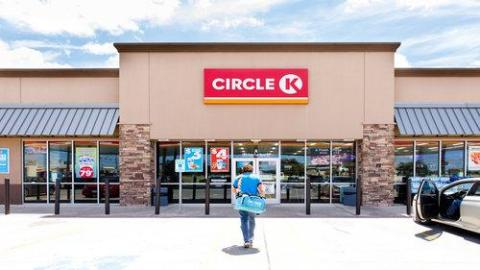 Retailers other than Amazon are seeking autonomous payment options.

Contactless, autonomous payments — that is, enabling customers to walk out of stores with their goods without wasting time in checkout lines — stands at the frontier of retail payments. Amazon, of course, is the leader in this area, but a new test at a Circle K convenience store in the Phoenix area could help bring that concept to other merchants, and, perhaps, at a cheaper cost.

During the test consumers who download the Standard checkout app and scan stickers inside the store will be able to buy most goods (alcohol not included) and be charged for purchases without having to checkout with a store clerk or even a payment kiosk.

The stickers, deployed at specific locations inside a store, allow customers to more or less signal their intent to take part in the autonomous payments. Ceiling-mounted cameras combined with what Standard calls proprietary artificial intelligence and machine vision software work to accurately associate each shopper with the items they pick up.

Standard said this Circle K store will become the first-ever retrofit of an existing convenience store with autonomous checkout technology. The test, if successful, also could help Circle K stand out among the competition, especially as c-stores themselves undergo multiple transformations to appeal to younger, more tech-savvy shoppers interested in higher-quality products.

“Autonomous checkout is one of our innovation priorities that enable us to make our customers’ lives a little easier every day. We thoroughly evaluated the market and realized that working with Standard presented significant benefits since they could integrate with our existing systems and retrofit our existing stores,” said Magnus Tägtström, head of global digital innovation at Alimentation Couche-Tard, which operates the Circle K brand. “We will not have to relocate merchandise, replace shelves or build an entirely new store to implement autonomous checkout.”

This Circle K autonomous payments test, of course, generally resembles the cashierless Amazon Go Grocery concept, the most famous example of this trend.

But there is a big difference, Jordan Fisher, co-founder and CEO of Standard, told Retail Leader. Instead of building from the ground up, as Amazon does, this technology is designed to “meet retailers where they are,” and be deployed as a retrofit — one that can ideally be completed overnight for a convenience store, meaning little risk of losing consumer traffic and sales. That matters for retailers that want to catch this payments innovation wave, and which operate large chains. Circle K, for example, operates some 15,000 locations.

As well, the technology is designed so that retailers deploying the autonomous payment system don’t have to change their inventory management, store layout or SKU administration. “There is no need to shut down stores or rip out shelves,” he said. “It’s pretty vanilla.”

Instead, the Standard API is flexible enough to either be used on its own by a retailer or mesh with that merchant’s existing software, he said. “You have to keep them running their stores in the same way as before,” he said about retailers wanting to deploy such payments but worried about commerce disruption. “They have to have the same operations.”

The single store retrofit part is perhaps the easiest step in the process. More complicated — especially for a big chain — is setting up the technology at the corporate retail level, which at this point can take six to nine months, he told Retail Leader. “We have to adopt to their systems to understand their products” and other aspects of the general retail flow for a particular chain. “It’s a very collaborative process.”

So how much does this all cost? After all, most retailers don’t have a mountain range of cash to invest as does Amazon.

“I wouldn’t say it’s cheap yet,” Fisher said. But he described the return on investment as “on the order of a year. I think the costs will come down pretty quickly.”