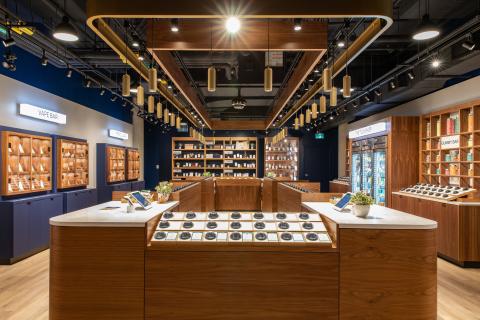 Canadian cannabis company FIKA Cannabis has debuted a flagship location in Toronto’s Union Station, bringing its products to the more than 300,000 people who pass through the station daily.

In a release, FIKA said the new flagship marks the first time a cannabis retailer has opened in a “major transportation hub.” Toronto’s Union Station over the last decade underwent renovations that welcomed new retailers, including Sephora.

“This is an unprecedented opportunity for cannabis retail and for the entire cannabis industry. FIKA will be the first cannabis store in a major transportation hub anywhere in the world - I can’t overstate how proud we are of this milestone,” Christopher Kane, the chief operating officer of FIKA, told Retail Leader. “It’s also an opportunity for amazing scale.”

The new Union Station location offers several options for consumers to shop, including The Flower Bar, where the product is organized for purchase by strain type and amount of THC. Customers can also shop at The Express Bar, which will allow for the selection of pre-curated items. The location will also sell vape and pre-roll products, as well as cannabis-infused food items, including chocolates, gummies and drinks.

"FIKA's name and approach are inspired by the Swedish concept of 'fika' — taking a pause in your busy day to connect with the people and things that bring you happiness," said Paola Marques, partner at GH+A Design Studios, which worked with the brand to create the shopping experience. "We designed this new location to do exactly that: to invite shoppers to physically 'take a breather' in the middle of Canada's busiest building."

The new location represents the latest expansion for the Toronto company, which opened its first location in August 2021. FIKA operates 18 locations across Ontario, including its new flagship store at Union Station and its existing flagship location in Toronto's Distillery District.

Products that contain marijuana are still illegal at the federal level in the United States, although numerous states have legalized cannabis over the last decade. Marijuana for recreational use is currently legal in 19 states and Washington, D.C., while medical marijuana is legal in 38 states and D.C., according to an analysis by Business Insider. Legal cannabis sales in the U.S. are expected to reach $27 billion by the end of this year, an increase of 7% compared to last year, according to the BDSA report.