Change for a Dollar

Change for a Dollar

Most dollar stores have the word "dollar" in their names. But that doesn't mean they're all alike–or predictable.

Some are based in rural and urban markets; others, in the suburbs. Some serve as treasure-hunt and fill-in destinations; others, as secondary or even primary shopping locations. They're mostly known for dry goods, but many of them, notably erstwhile leading chain Dollar General, are augmenting their offerings with refrigerated and frozen food, and even fresh produce.

And they've seen one of the biggest realignments of any major retail sector, with No. 2 Dollar Tree buying No. 3 Family Dollar to form a new top dog. The $8.5 billion deal, finalized at the beginning of this year, will create a new company by bringing together two chains whose approaches and business plans aren't entirely in sync.

Dollar stores have roughly $55 billion a year in annual sales, and they constitute one of the consistently fastest growing retail sectors, with sales increasing at about 10 percent a year over the last decade. They're also the most ubiquitous, and their numbers are predicted to grow still further.

"We estimate that the industry will reach 'saturation' at about 35,000 stores in the mid-2020s," says Nicholas Hodson, principal and North America retail leader at Strategy&, a unit of PwC.

The sector has a high degree of concentration in the hands of the top three, soon to be two, players. Dollar General, Dollar Tree and Family Dollar have, among them, $38 billion in sales (roughly 70 percent of the total) and more than 25,000 stores. They also account for a good share of the sector's growth: The three of them have opened a total of 2,579 new stores since 2012.

The ubiquity of dollar stores is a large part of their appeal. "The majority of our customers live within three to five miles, or a 10-minute drive, of our stores," Family Dollar said in its most recent annual report. "Our close proximity to customers drives customer loyalty and trip frequency and makes us an attractive alternative to large discount and other large-box retail."

Hodson says dollar stores are growing especially fast in areas where the only alternative is a big-box store. "I don't think it is a coincidence that dollar penetration tends to be highest in the same counties/MSAs [metropolitan statistical areas] where big box EDLP leaders' penetration is highest," he says. "Many small, rural towns have a big-box store and two to three dollar stores, and not a lot else."

Their small size also adds to their convenience. At 7,000 to 10,000 square feet, they're easier to navigate than the average supermarket–and, as Mike Paglia, director of retail insights at Kantar Retail, notes, shoppers "aren't tempted with a lot of stuff they can't afford."

Affordability is, of course, an even bigger part of their appeal. Historically speaking, dollar stores are heir to the five-and-dime stores of previous generations. They traditionally do well in bad economic times, which is why they thrived in the recession. Even post-recession, they've put up good numbers. Dollar General, in the most recent quarter, had a net sales gain of 8.8 percent over last year, with same-store sales up 3.7 percent. Sales at Dollar Tree also went up 8.8 percent, with same-store sales up 3.4 percent. Even Family Dollar, with the worst performance of the big three–making it a ripe target for acquisition–saw same-store sales go up 0.5 percent in the quarter ending Feb. 28 (the last one with info available).

This is partly because post-recessionary gains in the economy have largely been funneled upward. According to a study by the Federal Reserve, the share of all U.S. income that went to the top 1 percent of earners rose from 28 percent to 30 percent between 2010 and 2013; the corresponding share for the bottom 90 percent fell from 56 to 53 percent.

To appeal to lower-income shoppers, dollar stores–which, after all, have their price point in their name–have to deal in absolutes.

"The price points are driven by an understanding of how this low-income shopper really thinks about value," Paglia says. "'Value' is kind of a nebulous, situational type of term. [Dollar stores] really understand that value for this shopper is very functional and very absolute. I go into a store, and I only have, literally, a ten-dollar bill in my pocket. So for me it's all about spending as little as possible, because if my basket total comes to $10.49, I'm going to have to take something out of my basket. And they work really hard to avoid that scenario for the shopper."

But dollar stores are now appealing to shoppers other than the financially stressed, says Rich Nanda, principal with Deloitte Consulting.

"Dollar stores increasingly appeal not only to lower-income consumers, but also to more affluent consumers," Nanda says. "As lower-income consumers and the middle class continue to struggle to regain their pre-recession footing, the discount channels, including dollar, are playing a very important role for these consumers. However, dollar stores also appeal to more affluent consumers, often in suburban locations, looking for a convenient fill-in role for grocery and household consumables. For some consumers, the unexpected refrigerated and frozen sections of dollar stores, in addition to the expected ambient packaged goods offerings, has increased the frequency of trips and basket size."

Due in part to this disparity, different dollar stores take different approaches in establishing their price points.

Dollar Tree holds rigidly to the $1 price point, even incorporating the phrase "Everything's $1" into its logo and on shelf risers and other in-store signage (as well as using a "1" as the trunk of the tree in the logo). Family Dollar, which is about to be acquired by Dollar Tree, takes a different approach, selling items with prices up to $10.

"There is room for promotions for the shopper, but they still have to align with the shopper's craving for regular, consistent, predictable pricing on the items they buy all the time," Paglia says. "That's a fine line to walk if you're a Dollar General, because if your promotions get too extreme, then when the shopper goes in to buy an item when it's not on promotion, they run the risk of having the experience of sticker shock. That can be something that really erodes their trust in the retailer's pricing."

Dollar Tree's and Family Dollar's relative approaches to pricing may explain the difference in their shopper bases. Dollar Tree's strict adherence to the $1 price point necessarily limits its product selection. This is one reason why most Dollar Tree stores are located in suburbs; their limited selection precludes them from serving as primary or even secondary retail destinations. This forces them instead into the role of fill-in or "treasure hunt"-type shopping trips for shoppers who already have access to other retailers for food and the other things they need. Family Dollar, with a greater selection, is in a better position to serve as a secondary or even primary source of food and other items, which is why the majority of their stores are in rural and urban areas underserved by other retail channels.

This difference probably also accounts for their relative approach to CPGs. According to their last annual reports, 73.4 percent of Family Dollar's sales were in consumables; with Dollar Tree, it was only 49.3 percent. (It should be noted, however, that Family Dollar has a rather broad definition of "consumables" that includes items like batteries, hardware, automotive supplies and paper products.)

All things considered, Dollar Tree's approach is working better, which was why they were in a position to buy Family Dollar–after outbidding Dollar General.

Dollar Tree approached Family Dollar with an $8.5 billion bid in July 2014. Run by Howard Levine, son of the chain's founder, Family Dollar was ripe for a sale after a run of disappointing results; activist investor Carl Icahn, who had amassed a 9 percent stake in the company, had advocated for a sale (before selling all of his shares). Shortly after Dollar Tree's bid, Dollar General made its own bid of $9.1 billion, which the Family Dollar board rejected. Dollar General then took the bid to shareholders as a hostile offer. After delaying a vote twice, causing Dollar Tree to threaten to walk away from the deal, Family Dollar's shareholders accepted Dollar Tree's offer in January.

The biggest reason the Family Dollar board rejected Dollar General was antitrust divestiture requirements. The Dollar Tree deal will require the divestiture of only about 340 stores, out of more than 13,000 now owned by the two companies. A deal with Dollar General would have required many more stores to be divested and might not even have passed muster with the Federal Trade Commission at all. This is because Dollar General and Family Dollar have rural locations that overlap in many cases; Dollar Tree, which is mostly in suburban areas, doesn't have nearly as much overlap.

This situation may have eased antitrust requirements, but it will make, for certain, challenges going forward. In his first comments after the deal was finalized, Dollar Tree CEO Bob Sasser said in June that Family Dollar went astray by charging too much for some products and by opening stores in suburbs that didn't have their base shoppers–ones who used the stores as primary locations. Some such stores may be changed to Dollar Tree locations, says company spokesperson Randy Guiler.

The purchase also poses obvious challenges to Dollar General, which will no longer be the No. 1 dollar store chain. "Dollar General is kind of scrambling to defend its leadership position in the wake of some of these changes," Paglia says.

One of the main purposes of the larger stores is to allow Dollar General to sell more food, especially fresh, refrigerated and frozen food. This won't be much of a profit center for them, since they won't sell enough volume to make up for the low margins on food. But food has the potential, especially in "food deserts" that are underserved by conventional food retailers, to attract customers who might buy higher-margin goods.

Food generally is a challenge for dollar stores, not just because of the low margins. Keeping the price points within reach of the clientele can be difficult, especially with CPG suppliers whose package sizes and supply chains are designed for conventional supermarkets. These suppliers might have to make adjustments to sell in the dollar store channel, Hodson says.

"Among the most important accommodations are smaller pack sizes to bring down unit price and logistics designed to fit with the relatively low volume stores (just north of $1 million each)," he says. Kraft, General Mills and others have developed small package sizes for dollar stores that hit the low price points, even though they can cost twice as much or more on a per-ounce basis.

"Dollar stores have made heavy capital investments to carry refrigerated and frozen foods, so I do not see that going away anytime soon," Rains says. "They are using the refrigerated/fresh to drive frequency into their stores, but the challenge has been building the supply side support system. They still have some work to do to carry and maintain the right items for their consumers. As long as they get that right, they will continue to maintain those sections."

David Wright, marketing manager for the Hartman Group, agrees that dollar stores will probably have to up their game when it comes to food.

"In order to compete fully with other food retailers, dollars stores will increasingly have to offer food experiences that link to premium, or at least fresh, in order to stay relevant," Wright says. 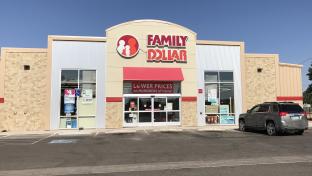