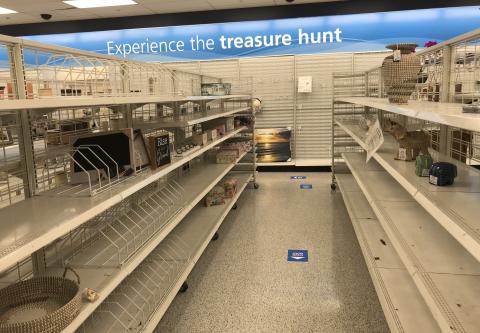 Depleted inventory levels, especially in the home area shown above, at re-opened Ross Stores hinded the company's second quarter sales.
Sales at Ross Stores rebounded nicely at re-opened stores in the second quarter, but remained below pre-COVID-19 levels and that trend is continuing in Q3.
The off-price retailer reported a 12% comp decline for the period ended Aug. 1, reflecting store closures that began on March 20 and continued through a portion of the second quarter. The company began a phased process of reopening its stores on May 14, with the vast majority of its retail locations open and operating by the end of June.

"Comparable stores sales during the quarter were impacted by a number of factors. During the initial re-openings, sales were ahead of our conservative plans as we benefitted from pent-up demand and aggressive markdowns to clear aged inventory. In the weeks thereafter, trends were negatively impacted from depleted store inventory levels while we were ramping up our buying and distribution capabilities,” CEO Barbara Rentler said.

Off-price has been a retail winner for years, but the pandemic has posed a new challenge to the business model. It remains to be seen whether the off-price customer, even during a pandemic, will be determined enough to mask up and flock to stores for an in-person treasure hunt. To be sure, as an off-price retailer, Ross is well-positioned to thrive in a recessionary climate.

Looking ahead, Rentler said: “As we move into the third quarter, trends have not materially changed from the second quarter with comparable store sales for the first two and a half weeks trending down mid-teens versus last year. There remains significant uncertainty on how the pandemic will continue to evolve and affect consumer demand and the economy, and the potential exists for additional government mandated shutdowns if COVID-19 cases remain elevated or further increase. Given these risks, we will continue to plan and manage our business very cautiously. Due to the limited visibility we have on these risks, we are not providing sales or earnings guidance at this time.”