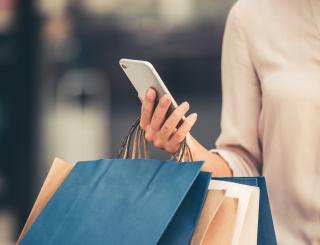 Consumers are making more purchases than ever through apps, reaching a record $32 billion in the first quarter of 2021, according to a new report from App Annie.

Compared to the same period in 2020, spending rose 40%, highlighting the rapidly changing shopper habits to online and digital channels field by the Covid-19 pandemic. Stay-at-home orders, which first began in March 2020 around the globe, influenced how people spend money and which apps they used.

In retail, 2020 represented the biggest year ever in mobile spending, with global time spent shopping outside of China rising 45%. In the U.S., more than $53 billion was spent in mobile apps from Nov. 1 through Dec. 9, 2020. The top retail apps used by consumers included Amazon, Walmart, eBay, Target and Instacart, according to app Annie’s report.

Pinterest also saw a huge increase in users, driving the company to make all its items shoppable.

“People have always come to Pinterest to shop, and in 2020 we made it easier than ever to go from inspiration to purchase, and for retailers to upload their catalogs and benefit from product discovery,” Dan Lurie, head of shopping product at Pinterest, said in the report. “As distributed commerce unlocks seamless shopping experiences, we'll continue our work to make every item on Pinterest shoppable.”

Some of the strongest growth categories included games, photo and video, and entertainment, the report found. However, health and fitness app downloads rose 25% quarter over quarter as gyms, parks and other fitness options closed.

While the biggest increases were seen in gaming, retailers can learn a lot about their customers by understanding how much more time they spent on their phones last year. In 2020, the daily time spent per user on mobile devices was 4.2 hours, up 20%. Americans spend 8% more time on their phones than they do watching TV, according to the report.

When it comes to changing shopping habits, some retailers were quick to see an increase in app usage as a starting point in the path to purchase or as the purchase point. For example, Target’s app saw a 70% increase in sales last year.

Businesses also invested huge sums last year in apps--$73 billion in investments were reported for 2020, an increase of 27% from the previous year.