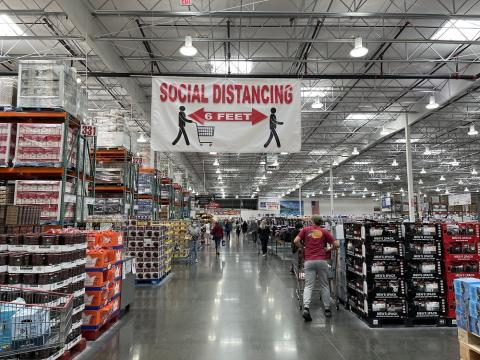 Costco Wholesale Corp. says it has continued to see an acceleration in same-store sales during 2020's challenging retail environment due to the company's efforts to create a safe space for shoppers.

In the first quarter, Costco saw steady demand for fresh food, sundries and beauty products, Galanti said. Demand in sales went up as COVID began spiking again. A tough area, Galanti said, is nitrile gloves, surface cleaning wipes and sanitizing sprays, also in some cases, some paper goods. Overall, dairy items are in good shape, as well as proteins and produce on the fresh side. Food and sundries, soft lines and hard lines, the other three main core components all had higher margins year-over-year in the quarter as well. But fresh foods was the driver. Galanti said "total online grocery grew at a very strong rate in Q1, nearly 300%."

Galanti said Costco shoppers are also spending the money they would normally spend on restaurants and events in categories such as appliances, sporting goods and Costco's new private jet service, introduced in November. The retailer teamed up with Wheels Up, a private jet charter company that lets members use their jets at an hourly rate. For $17,499.99, members will get a 12-month membership plus $3,500 Costco Shop Card, a $4,000 flight credit, travel on private aircraft, guaranteed nationwide aircraft availability all year, access to special events, a complimentary one-year Inspirato Membership for luxury vacations, and more. Wheels Up is a new way for Costco to surprise and delight members consistent with its longstanding approach of delivering value.

“Costco’s earnings demonstrate the retailer’s strength in rapidly adopting omnichannel strategies while catering to its loyal customer base through a robust and meaningful membership program that’s seen growth over the past year,” said Christian Selchau-Hansen, CEO and co-founder of Formation.ai.

“When you think of Costco, it’s easy to think of the in-person shopping experience — free samples, a food court and a sweeping warehouse with aisles and aisles of discounted, bulk goods. But Costco’s increasing customer base showcases the importance of great digital experiences and loyalty programs for the modern shopping experience you have access to if you’re a Costco member —  including wonderful and unexpected items at a great price often discussed in articles, blogs, and broadcast segments. And all of this depends on being a member,” said Selchau-Hansen.

The company incurred $212 million in costs during the quarter related to higher wages during the pandemic. Costco said earlier this year it would pay employees an extra $2 an hour, and the retailer said Thursday it has extended that increase through Jan. 3.

Costco has been incurring higher expenses related to e-commerce, too. The gross margin was 13.3% in the period, compared with a consensus estimate of 11.15%.

During the quarter, Costco says it opened eight new stores. Galanti said the retailer still has no plans to offer grocery pickup.

Issaquah-based Costco operates 787 warehouses worldwide, including 543 in the United States and Puerto Rico. The company, which is No. 5 on Progressive Grocer’s 2020 PG 100 list of the top food and consumables retailers in North America, also has e-commerce sites in the United States, Canada, the United Kingdom, Mexico, Korea and Taiwan.