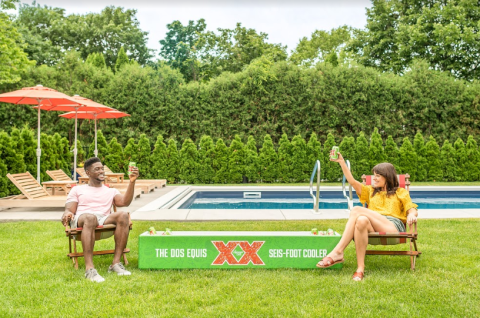 Heineken USA’s Dos Equis brand is out with a clever summer promotion befitting a brand that rocked the beer world several years ago when it introduced the iconic Most Interesting Man in the World brand ambassador.

Dos Equis’ latest master stroke of creativity is a light-heart promotion involving a six foot long cooler designed to help beer drinkers practice social distancing. To make the most of the unusual times, Dos Equis said it is giving away six foot long coolers so beer drinkers will know exactly how far six feet really is. The limited-edition Dos Equis Seis-Foot Cooler (seis is Spanish for six) will be available while supplies last, according to the brand.

“Just because we have to social distance doesn’t mean we have to skip out on summertime entirely,” said Edith Llerena, senior brand manager for Dos Equis. “There’s a responsible way to drink responsibly throughout the summer. With the new seis-foot cooler, beer drinkers can reclaim a piece of the vision they had for a normal summer, hanging out and drinking beer with friends. Just sit on opposite ends of the cooler to keep a safe distance apart.”

To secure one of the 45 coolers the brand plans to distribute, beer drinkers need to be ready to upload a Dos Equis receipt at 11 a.m., EST on Friday, June 26.

The seis foot cooler isn’t going to move the needle on market share the way the Most Interesting Man did, but it’s a pretty clever idea nonetheless.