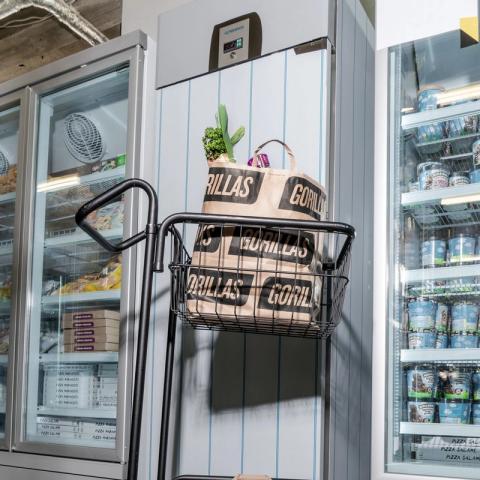 The funding would add to the roughly $1 billion the company raised in a funding round in October 2021, during which the company was valued at about $3 billion. Bloomberg was first to report the latest funding news. Currently, Gorillas operates in the U.K., France and the U.S.

“Last year, we not only built Gorillas into the clear pan-European leader, but also demonstrated a clear path to profitability across our markets,” Gorillas CEO Kagan Sumer told Bloomberg.

Gorillas is part of a growing commerce space of third-party delivery services. While DoorDash is one of the most dominant companies in the space––and projected to become the third-largest e-commerce banner by 2025––new entrants are ramping up competition. Delivery services companies are promising ever-faster delivery times, including Gorillas, which offers a 10-15-minute window in New York. DoorDash has also jumped on this ultra-fast trend, while Gopuff promises swift, on-demand delivery in many cities thanks to its own fulfillment hubs.

Demand for the instant needs and delivery services areas took off during the COVID-19 pandemic and has remained elevated. With the increased demand, investors have come knocking to help delivery service providers rapidly expand across the U.S. Getir, another delivery rival based in Turkey, is looking to raise capital with a sky-high valuation of $12 billion, Bloomberg reported. Here in the U.S., Gopuff has been on a fundraising run over the past few years, raising $1 billion in 2021 at a valuation of $15 billion. The company has raised $3.4 billion in funding to date, according to Crunchbase.

Gorillas acquired Frichti, a French delivery company, in January, helping the company expand its footprint in France. Frichti also offered something new to Gorillas, as the company delivers both ready-to-eat meals and groceries, as well as private label products. Gopuff similarly began offering private label products at the start of 2022, underscoring the rapid advancement of the companies in this evolving sector.

As companies like Gorillas, Getir and Gopuff command huge investments and continue to support more market share in dense urban markets, there are some who worry about the impact on cities. For example, Curbed writer Kim Velsey recently questioned the future of retail as delivery service providers continue to occupy “spaces designed for shopping when the shopping is all done elsewhere.”

As New York residents retracted from their lives on the street and in public during the pandemic, delivery apps swooped in to provide services to people at home. In the Upper West Side, six dark stores containing delivery fulfillment centers have found a home taking over street-level retail.

The trend happened quickly, accelerated by the rapid shift in consumer behavior brought on by the pandemic. As consumers continue to return to physical retail stores and foot traffic rises, the hybrid shopping experience between online and in-store will continue to evolve––as will the mix of retail stores on city streets.