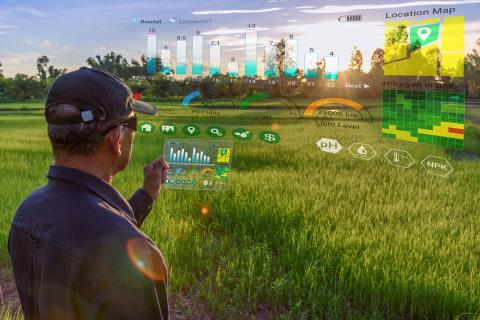 The concept of being digital first doesn't just apply to retailers. Consider the growing global population and retailers’ role in feeding a hungry planet with products grown and harvested by those on food's frontlines.

“Growing populations, rising living standards, and changing tastes are set to drive a 50% increase in the amount of food we as a species consume by 2050,” according to the latest thinking in Citi Global Perspectives and Solutions recent Disruptive Innovations report. “To produce this amount of food without a rise in yields would involve an increase in farmed land greater than the total arable land of the Americas and Europe combined.”

Arable land isn’t increasing and Citi GPS notes that there is increased scrutiny on agricultural water consumption, pesticide usage, fertilizer costs and CO2 emissions. Meanwhile, consumers expect organic products which typically involve growing techniques that produce reduced yields compared to conventional methods. The solution to increasing yields, as is the case with so much of the rest of retail, is to leverage technology and make farmers more productive.

“The threefold difference between the top performing U.S. farmer and the average U.S. farmer is not in their access to tools, but in how they use their tools,” according to Citi GPS. “It is here that digital agriculture is set to massively shift the face of modern agriculture as it enables farmers to make the best possible decision at every stage of the farming process, ensures effective development of the best farming technologies, and eventually enables full-scale automation of the farm.”

The implications for a digital first grocer, especially those with a sustainability agenda, is to look upstream in their supply chains and work with growers who employ the most modern practices. The good news for retailers looking to play a more influential role in the growing practices of trading partners is improvement in agriculture data capture and the ability to analyze information.

“This technology shift is being enabled by the cheap availability of processing power and data storage, the proliferation of novel data collection systems, such as satellites and drones, and consistent and persistent connectivity with the Internet-of-Things and 5G,” according to Citi GPS.