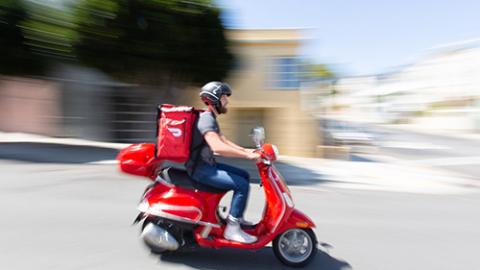 DoorDash took in $1.9 billion in revenue in the first nine months of 2020 — up nearly 224% from the $587 million logged during the same period a year ago. That’s according to the prospectus that the San Francisco-based company filed with the U.S. Securities and Exchange Commission (SEC) as DoorDash moves toward an initial public offering.

The looming IPO comes as delivery services continue to see growth during the pandemic, which has brought restaurant closures and stay-at-home orders. For DoorDash, the public-health crisis has shrunk its net loss to $149 million for the first nine months of the year, down from $533 million for the same period in 2020.

The number of shares to be offered and the price range for the proposed offering haven't been determined yet. DoorDash intends to list its Class A common stock on the New York Stock Exchange under the symbol "DASH."

In its new filing, DoorDash said that it's supported by some 1 million delivery drivers — whom the company calls “dashers’ — and has more than 19 million customers. That number includes 5 million customers who pay $9.99 per month for the company’s DashPass, which offers unlimited restaurant deliveries.

DoorDash also noted that more than 390,000 merchants use its technology platform. “Since our founding, merchants have generated over $19 billion in sales on our Marketplace, and in 2019 alone, merchants as a whole experienced 59% year-over-year same-store sales growth on our Marketplace,” the company said in its SEC filing.

In the crowed delivery space, DoorDash, as of October, claimed to have 50% of the share of the U.S. market. That compares with 22% for Uber and 20% for Grubhub. San Francisco-based Uber, as it keeps growing, is in the process of buying delivery service Postmates, also based in that city, while Chicago-based Grubhub recently launched a new program with Lyft, based in San Francisco as well.

For its part, DoorDash continues to expand into new areas.

DoorDash still has ample room to grow, according to its recent filing with the SEC.

“U.S. consumers on our platform in September 2020 represented less than 6% of the U.S. population as of Sept. 30, 2020, and we believe we are in the early phases of broad market adoption,” the company noted. “In 2019, we generated gross order value on our Marketplace, or Marketplace GOV, of $8 billion. In the same period, $302.6 billion was spent off-premise at restaurants and other consumer foodservices in the United States. Our Marketplace GOV in 2019 represented less than 3% of this off-premise spend, highlighting the large addressable opportunity ahead of us in the food vertical alone. We are also beginning to expand into other verticals beyond food, and our ambition is to empower all types of local businesses.”

Much of the future for DoorDash depends on younger consumers and the suburbs, according to the filing.

“Fifty-eight percent of all adults and 70% of Millennials say that they are more likely to have restaurant food delivered than they were two years ago, and we believe the COVID-19 pandemic has further accelerated these trends,” the delivery provider said. “We believe that suburban markets and smaller metropolitan areas have experienced significantly higher growth compared to larger metropolitan markets because these smaller markets have been historically underserved by merchants and platforms that enable on-demand delivery. Accordingly, residents in these markets are more acutely impacted by the lack of alternatives and the inconvenience posed by distance and the need to drive to merchants, and therefore consumers in these markets derive greater benefit from on-demand delivery.”