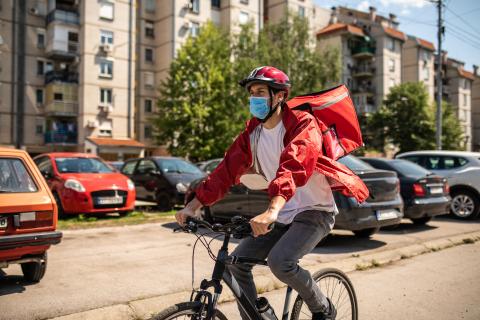 With about $1.9 billion in revenue, DoorDash has grown to be one of the biggest players in the U.S. food delivery market.

DoorDash, Inc. is moving closer to executing an initial public stock offering with plans to sell an estimated 33 million shares of Class A common stock for between $75 and $85. If the IPO is completed at the midpoint of that range, it would push the company’s valuation above $25 billion, according to The Wall Street Journal.

San Francisco-based DoorDash announced a few weeks ago that it filed a registration statement on Form S-1 with the U.S. Securities and Exchange Commission relating to the IPO.

In June, the last-mile logistics platform was able to raise $400 million in Series H funding, giving it a valuation of $16 billion.

The offering will be made only by means of a prospectus. A registration statement relating to these securities has been filed with the Securities and Exchange Commission but hasn’t yet become effective.

In comparison, publicly held Albertsons Cos.’ IPO received a lukewarm response from investors during its first day of trading back in June. Shares priced at $16 closed down 3% to end the first day of trading at $15.52 on June 26. The grocer's IPO gave it a valuation of roughly $9 billion.

Founded in 2013, DoorDash now operates in more than 4,000 cities. Food delivery has become essential to everyday life during the pandemic. According to DoorDash’s economic impact report, released in October, 90% of its drivers—or Dashers—believe DoorDash provides an important service during COVID-19. With about $1.9 billion in revenue, it has grown to be one of the biggest players in the U.S. food delivery market.

In August, it teamed up with grocery stores like Smart & Final, Meijer and Fresh Thyme to introduce on-demand grocery delivery via the DoorDash app for the first time.

DoorDash also has a presence in the drug store space. In June, CVS Pharmacy, the retail division of CVS Health, formed a partnership with DoorDash to expand same-day home delivery of its health, beauty and wellness products. A month later, it joined forces with Walgreens to provide on-demand delivery services.

Additionally, in August, DoorDash showcased its knack for innovating in retail with the launch of DashMart, an online convenience store. Consumers shopping via the DoorDash app can now buy such items as food, snacks and household essentials under the DashMart banner.