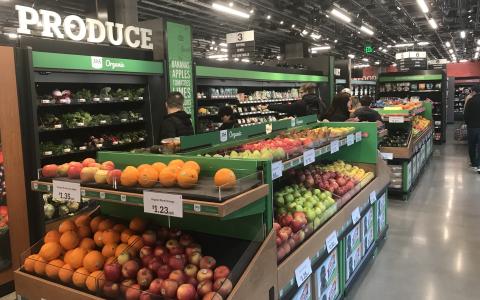 Amazon Go Grocery features a coventional fresh department offering and presentation, but items are sold individually since their is no weighing of merchandise at checkout.

Amazon is resetting the expectations of urban grocery shoppers at its new cashierless Go Grocery concept in downtown Seattle.

Billed as the first grocery store with just walk out shopping, the 10,700-sq.-ft. store at 610 E. Pike Street opened on Feb. 25, offering an assortment geared toward city dwellers with small households. This merchandising strategy is evident from the breadth of categories offered, which is comparable to a typical suburban supermarket, but an assortment that is highly curated, localized and features smaller pack sizes within categories.

“In the space that was available we asked how do we provide a store that meets a one trip mission,” said Ken Bang, the national leader for Amazon Go, referring to how assortment decisions were made.  Bang, an 11 year Amazon veteran, oversees the operations of the 25 Amazon stores with cashier-less technology, or what the company prefers to call, “just walk out shopping,” and is surveying the L-shaped store near the exit during Retail Leader's visit on Feb. 26. “I feel good. Everything is going as we expected it to go.”

Expectations for how things would go were apparently high because the store is bustling activity during Retail Leader’s visit which began at 4:37 p.m. and lasted for two hours, 19 minutes and 53 seconds. That degree of precision is possible because shoppers are given access to the store by opening the Amazon Go app and scanning a code. Purchases are tracked (we bought seven items for $20.89) by what appear to be thousands of overhead cameras, Bang’s area of expertise as head of Go operations, which blend into a black background. Shoppers are oblivious to the technology powering an experience which feels a bit magical today, but will become a new normal over time as there is much attention being paid to the elimination of payment friction throughout retail.

It’s the second day the store is open and it is peak time for shoppers to drop in to pick up a few items and many are. The store is busy, but the relatively narrow aisles are navigable with small upright carts. Most of the traffic in the store appears to be actual shoppers as opposed to those simply curious about the concept as people appear purposeful in their behavior and are selecting merchandise. Amazon Go the payment platform isn’t new to Seattle residents, but the store format, at nearly four times the size of the largest Go concept to date, and merchandise assortment is. And there are telltale signs merchandise is moving.

Amazon is dispensing free bright green reusable shopping bags and the racks holding the bags are empty in several locations. There are some isolated out of stocks in fresh departments and inventories are thin in other areas, due in part to the limited holding capacity of fixtures. Employees in bright green Amazon Go hats are scurrying about with plastic totes on carts to keep shelves filled. There is a steady stream of shoppers just walking out of the store. The least busy part of the story is an adjacent alcoholic beverates area offering beer, wine and spirits.

For a look at key departments inside Amazon Go Grocery, see below: 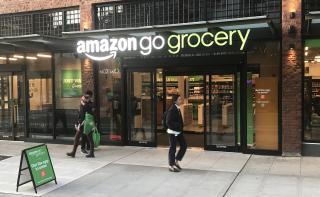 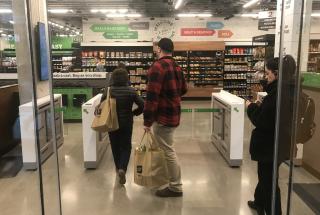 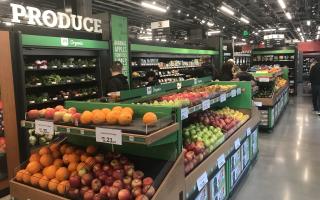 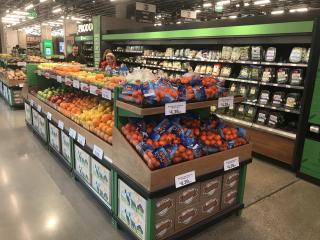 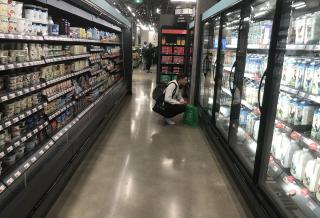 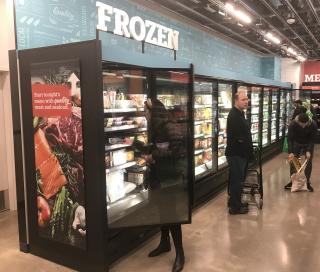 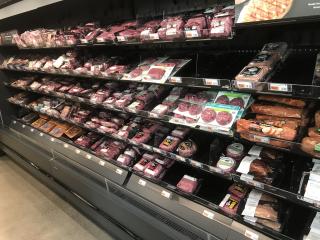 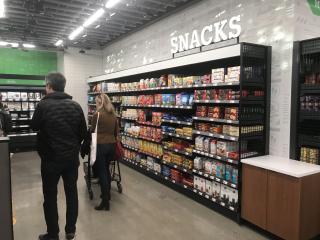 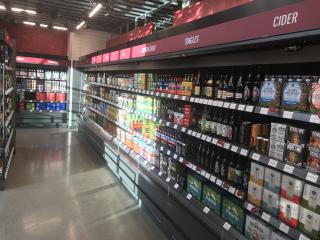 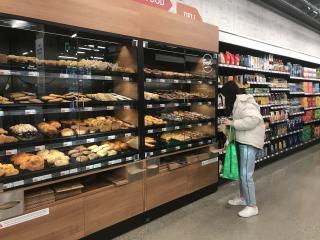