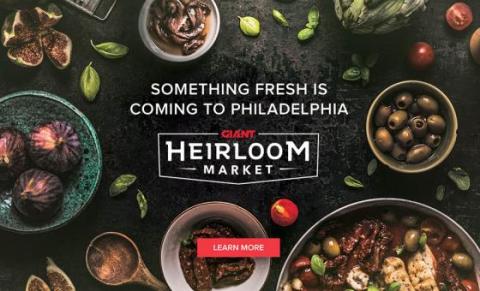 Giant Food is following the growing business trend of downsizing.

Giant Food Stores opened a new, urban concept store that is about 35,000 square feet smaller than its average store.

The company announced the opening of its new concept store, called Giant Heirloom Market, a new store concept, format, and brand name for urban neighborhoods. The store will be located in the Graduate Hospital neighborhood in Philadelphia.

"As we celebrate our 95th anniversary, we can't help thinking about the next chapter in Giant’s story," said Nicholas Bertram, President of Giant Food Stores. "Philadelphia is a natural choice for us to debut our new Giant Heirloom Market format, as we're able to draw upon our passion for food and our fondness for local purveyors, all while leveraging innovation to bring something special to our new Graduate Hospital neighbors."

Although this may seem like a drastic change, the number of retailers who are downsizing is ever-growing. As less and less customers find it necessary to step through retail doors due to various e-commerce options, businesses are starting to reconsider the size and the variety of in-store products. According to Nielsen, the use of click-and-collect online ordering now accounts for 48 percent of all online grocery purchases, up from only 18 percent in 2016.

According to the report, online grocers saw over $21.6 billion in sales over the past three years, reaching 88 percent higher than last years $11.9 billion. While online grocery purchases represent only 26 percent of online FMCG, comparatively, it is a splash in the pond versus in-store grocery stores which amassed $413 billion this year. This surge of online grocery purchasing prompts the desire to downsize physical stores.

According to the company, the new store is supposed to be a modern environment and offers an assortment of high-quality, fresh, seasonal, and flavor-focused foods and everyday essentials. Special features will include a “produce chef” who will prepare veggies and fruit on demand, local artisanal breads, and a vast array of plant-based foods. Also on the menu: sampling and demonstration. In addition, if customers need something that is not carried in the store, associates will help guide them to in-store iPads to order online.

Though Giant has had a presence in Philadelphia since 2011 with its Grant Avenue store, the Giant Heirloom Market store  will be the first store downtown for the company. The location, at 2303 Bainbridge Street, is the first of several stores planned for Philadelphia.

The company reported that the new store will create approximately 60 new jobs when the first store opens later this year.

Giant Food Stores is based in Carlisle, Pa., and is owned by Ahold Delhaize.