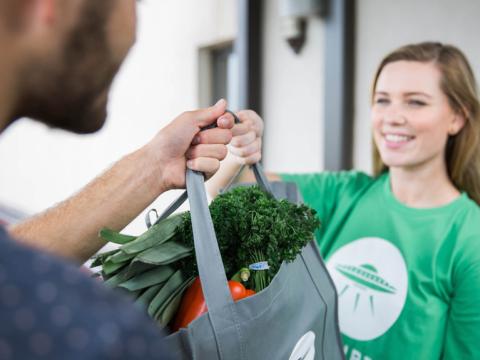 Shipt, the grocery delivery service owned by Target, announced that it will begin same-day delivery from Morton Williams Supermarket and Target to all five New York City boroughs: the Bronx, Brooklyn, Manhattan, Queens and Staten Island.

Shipt is launching in the New York City area, where the competition for retail delivery is at an all time high.

Shipt, the grocery delivery service owned by Target, announced that it will begin same-day delivery from Morton Williams Supermarket and Target to all five New York City boroughs: the Bronx, Brooklyn, Manhattan, Queens and Staten Island.

Beginning Aug. 9, Shipt members will be able to shop fresh foods and household essentials from both major retailers, in addition to an assortment of product categories that are unique to Target, such as home goods, electronics, toys and other products.

“We’re making shopping for daily essentials easier than ever before. Busy urban residents are able to access the familiar aisles of their local stores seamlessly, bringing everything from dinner ingredients to household items right to their doorstep,” said Bill Smith, Founder and Chief Executive Officer of Shipt. “This launch is a symbol of Shipt’s rapid growth, as we continue our expansion to bring Shipt to households across the country.”

This announcement coincides with the launch of same-day delivery in the Greater New York City metro area, which will begin throughout the months of July and August with a variety of retailers. These additional metro areas include Hudson Valley, Kingston, Long Island, Mount Kisco and White Plains, New York. Cumulatively, this landmark expansion will give more than 3.4 million households across the New York City area access to products delivered by Shipt in as little as one hour.

Other grocery delivery services in the New York City area include AmazonFresh, FreshDirect, Instacart and Google Express. To separate from the competition, Shipt has an annual membership fee, which grants access to free, unlimited delivery on orders of more than $35. New members who sign up before Aug. 9 will receive an annual membership for $49, with the regular fee being $99. Amazonfresh has its monthly fee set at $14.99, which is  tacked onto the cost of a Prime membership. Comparatively, FreshDirect’s membership fee is $129 for a year, which includes unlimited deliveries; otherwise, home deliveries within the five boroughs of New York City cost $5.99 with a minimum order of $30.