It finds and develops new products with aplomb, but only as long as they fit the tastes of its customers, and when they become mainstream, it moves on to the next. It's currently in the process of building or converting six new stores, but it has avoided the growth-at-all-costs mentality that sank Haggen (from which it picked up one of the new stores).

The new stores will bring the total for the Southern California grocery chain up to 26. Under the 20-year guidance of CEO Kevin Davis, Bristol Farms is strengthening its grip on the upscale market in Southern California. Its eponymous banner specializes in prepared offerings, many of which it produces in a central kitchen that adjoins its corporate headquarters in Carson. Foodservice offerings at the store in Newport Beach, remodeled in 2012, include a hot-wok station, a hot/cold sandwich station, an expanded fresh soup bar, an in-store café, a coffee bar and fresh sushi prepared on the spot. Other stores are undergoing remodeling that will devote even more space and resources to foodservice, which provides 27 to 30 percent of store revenues.

Another point of pride at Bristol Farms is a top-notch selection of fresh foods: meat, which include sausage, aged beef and ground meat prepared in the central kitchen at Carson, as well as air-chilled poultry; and produce, which gets shipped into a warehouse in Carson and out to the stores every weekday morning. The typical store has hundreds of varieties of beer and thousands of wines, as well as extensive offerings in cheese, deli meats, seafood, baked goods, bulk foods and much more.

The company also includes Lazy Acres, a natural/organic banner that is expanding from its current two stores to five by 2018, and Metropolitan Market, another upscale banner based in Seattle. Metropolitan Market was acquired by Good Food Holdings approximately two years after Endeavour Capital originally bought Bristol Farms in 2010 through a partnership with Davis and some of the company's other senior managers.

That deal was the third change of ownership that Davis has experienced at the helm of Bristol Farms. It was a privately held banner of only three stores when he came on board; Albertsons bought it in 2004, adding the original Lazy Acres store in Santa Barbara the following year. In 2006, Albertsons itself merged with Supervalu, which ended up spinning off Bristol Farms to its current ownership four years later.

Davis says the ownership changes were pretty much transparent as far as day-to-day business is concerned.

"During that time, I'd say that the differences weren't in the operation. It was nothing that the customer saw, or nothing that our employees saw," he says. "It was fortunate for us that the company was purchased and we helped who the buyers were through that process. All of our management stayed here and all of our focus stayed on the customer. All of it stayed on to become the best fresh- and service-oriented company that we could be."

The difference between life under Albertsons/Supervalu and life as an independent chain mostly centers on depth of pockets.

"When we were owned by gigantic companies like Albertsons or Supervalu, if we needed capital to make a decision, it was pretty readily available," Davis says. "They had a huge amount of resources, and they were quick to make decisions to use those resources to help us expand."

Now they have to be more cautious: "When you're privately held, and it's partially your own money and other people's money through the private equity sources, the diligence and the control over how you grow are a lot more critical to the investors and to the management team because it's us," Davis says. "So you don't want to make even one mistake. It's not like, ‘Let's try this and see if it works and build 10 stores or whatever.' It's, ‘Let's build one store at a time and knock it out of the park every time.'"

The company's current growth plan may be slower than under Albertsons/Supervalu, but it's judicious and strategic. Bristol Farms selects sites based on the company's sense of what people in a given area need and want.

"Generally, it will be how well they index in a foodie culture," says Adam Caldecott, chief operating officer and president of Bristol Farms. "You want to have a high degree of intellectual understanding of food in the communities that we'll serve."

This approach leads Bristol Farms into decisions that may seem counterintuitive, or at least against conventional wisdom. A good example is the 2012 conversion of a Bristol Farms outlet in Long Beach into Lazy Acres. Long Beach is almost 100 miles from Santa Barbara, the location of the original Lazy Acres, so the new site would get little, if any, word-of-mouth boost.

But Davis says contiguity wasn't a concern: "We think each store stands on its own. So it wasn't important that the second Lazy Acres store be close to the first one. We weren't trying to presell it." Lazy Acres emphasizes natural and organic products intended to appeal to consumers who prioritize a healthy lifestyle. He ticks off the neighbors that made Long Beach a good fit for that kind of store: Long Beach State University, a 50,000-square-foot LA Fitness gym, and five competing organic/natural grocers (one Whole Foods and two each of Trader Joe's and Sprouts).

Lazy Acres and Bristol Farms have some overlap in terms of their clientele and products, but there is an important difference. The consumers who make up most of Lazy Acres' clientele often value "clean" ingredients and health benefits above superior taste.

"That can be a taste inhibitor, because you may have people who are watching their diet specific to salt, or have reactions to onion, so you don't heavily spice things as you may be able to get away with at a high-end restaurant or a Bristol Farms concept," Caldecott says.

ALL ABOUT THE TASTE

With Bristol Farms, on the other hand, taste is king.

"For us, it's building our identity around taste," Caldecott says. "At the end of the day, we're looking to create unique items that only we sell that we can put a stake in the ground and rally around."

One of the keys to creating such items is Christophe Moreau, director of bakery and coffee. Moreau came to Bristol Farms a little over a year ago, after working at top-notch bakeries and restaurants in France, including Paul Bocuse.

Adjusting to American tastes has been one of Moreau's ongoing challenges. "Most often, everything is very sweet here. Oversweet. A lot of recipes, the first ingredient is sugar. I was very surprised by this." He adds, however, that in the time he's been in this country, he's seen American tastes evolve closer to European ones. Ironically, European tastes have also been evolving closer to American ones, he says, to the point where you have things like Tex-Mex restaurants in Paris.

One of the latest items that Moreau has developed is The Cookie. (That's its name, like "The Band" or "The Donald.") It's a huge single cookie that pushes the limits of indulgence, comprising 45 percent chocolate chips.

The Cookie epitomizes the Bristol Farms strategy of finding or developing products that no one else has, says Steve Howard, vice president of perishables, procurement and marketing. This extends to produce items. Howard names the Sumo tangerine, a Japanese fruit the size of a grapefruit, which Bristol Farms was the first American store to carry.

"Once it goes mainstream, that's when it's our job to find the next Sumo tangerine," Howard says.

"Bristol Farms is predicated on building brands, regardless of if we're building the next cookie or we're finding a small artisan provider that really can only sell their supply to a chain that has 15 stores at the end of the day," he says. "[We work] with them to build that up into a brand, and then what happens is they get big enough, and the big guns start to come in, Albertsons and Kroger, even Whole Foods to a degree, and they pick up those products and bring them to mass, and then we go out looking for the next one. Private label for us is finding the next small vendor that we can make big." 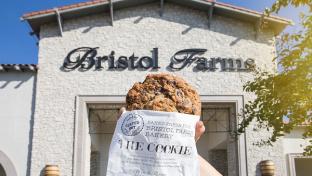 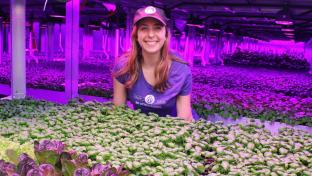