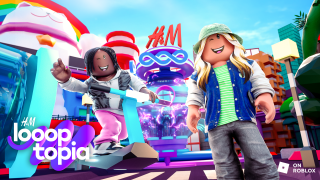 H&M has debuted a new metaverse experience: a Roblox game that sets out to teach players about fashion and circularity.

The immersive experience is called Loooptopia, according to a Jan. 4 release. It will let players use different materials and patterns in a “playful way” to create a garment and build a wardrobe for their avatar in the game. The game was created in partnership with Dubit, the studio responsible for recent metaverse experiences for Nickelodeon, the Grammy Awards and Elf on a Shelf.

The Loooptopia experience is a 3D Roblox game with “social interaction, engaging environments, mini-games, styling sessions, alternate worlds, events and more,” the release said. Players can use the game to learn about fashion and circularity — a pillar of sustainability that takes into account a product’s entire life cycle — in a fun and engaging way that encourages self-expression, H&M said.

"People who shop and wear H&M garments and accessories are increasingly spending time in virtual spaces and digital worlds,” said Linda Li, head of customer activation and marketing at H&M Americas, in the release. “The H&M Loooptopia Experience on Roblox is now allowing us to explore new ways to engage with our current and new customers in the places they love to be, both online and offline. In the coming years, H&M will continue to explore this fast-growing expanse of virtual and augmented realities.”

The game includes several worlds, like a city square, “Rainbow Fields,” “Neon Studiooo” and “Fabric Fooorest.” Players create clothing for their avatars through gathering materials in the worlds, called “environments” in the game, by playing mini-games and participating in styling sessions and live events, the retailer said. They can show off their creations on a virtual runway, and players can also trade clothing with other players using the Roblox game. As part of its focus on sustainability, players who want to change up their avatar can recycle their old virtual clothing to earn “super-rare elements,” the release said.

H&M is the latest retailer to launch a metaverse experience on Roblox, the gaming platform particularly popular with children and teenagers. West Elm in October last year released a Roblox experience that consisted of a virtual furniture store, coffee shop and merchandise boutique.

Roblox has 45.5 million active users according to data from the Influencer Marketing Hub, and it’s most popular with young users ages 9-12, who make up more than a quarter of the game’s players.

In 2021, fast-fashion retailer Forever 21  released its “Forever 21 Shop City” game on Roblox, which allowed players to own and operate their own stores. Pacsun last year introduced “Pacworld,” a Roblox game where players could open their own virtual mall.