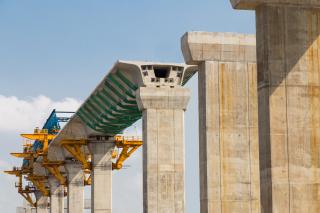 President Biden unveiled his $2 trillion infrastructure plan March 31, unleashing a wave of support and opposition across the country. With a proposed corporate tax hike, retail industry groups sounded off Wednesday in opposition of the plan’s funding method, citing the potential hits to retailers.

The plan, dubbed The American Jobs Plan, is set to become Biden’s landmark act that would rebuild the country’s infrastructure, fixing highways, rebuilding bridges, upgrading ports, airports and transit systems, ensuring clean drinking water, renewing the eclectic grid, expanding broadband access, and modernizing schools and hospitals. The focus from the White House heavily leans on direct job creation from the plan, as it addresses workers in the care economy and creates American jobs to rebuild the nation’s infrastructure, which has been badly underfunded and underdeveloped for decades.

Another piece of the plan that could be a boon to retailers is the revitalization of manufacturing in the U.S. and securing U.S. supply chains. Improvements in basic transport infrastructure--including waterways, ports, airports and roadways--will also positively impact retailers when it comes to their supply chains. Without massive infrastructure improvements over the next decade, the average U.S. household will lose $3,400 annually in disposable income due to infrastructure deficiencies, according to a 2019 report by the International Council of Shopping Centers linking infrastructure to retail success.

However, what is top of mind for retailers is the corporate tax hike that is key to funding the plan over the next 15 years.

Biden’s proposal would increase the corporate tax rate to 28%, up from the current rate of 21%. However, 28% is still historically lower and remains below the 30% tax rate corporations paid prior to the Trump tax cuts in 2017. The plan also takes aim at corporations that have moved their profits outside the U.S., making it harder for international companies to qualify for tax deductions.

According to the National Retail Federation, now is not the time to raise taxes on retailers.

“Improving U.S. roads, railways, bridges and ports will help the retail industry continue to move the products Americans want and need, but burdening businesses with the biggest corporate rate increase in 70 years will lead to further closures and job cuts,” NRF President and CEO Matthew Shay said. “Raising the tax rate on corporate income to the highest in the industrialized world, especially at a time when many businesses are still reeling from the impact of the pandemic, will not help us to recognize continued growth, spur job creation or encourage capital investment and will, in fact, deter domestic economic activity.”

“Retailers are strong proponents of the need for infrastructure improvements, particularly to the nation’s highways and ports which are overcrowded and underfunded. But how we pay for these investments needs to be carefully considered,” RILA’s Senior Executive Vice President, Public Affairs Michael Hanson said in a statement. “Raising the corporate tax rate for all businesses isn’t the answer.”

There are other ways the Biden administration should address the corporate tax rate first, such as closing loopholes, rather than increasing taxes for all businesses, according to RILA.

“Too many companies are currently paying little to no corporate income tax, while others pay full freight,” Hanson said. “This disparity needs to be addressed—whether its closing loopholes or reinstituting some form of minimum corporate tax—before raising the corporate rate a single point.”

NRF views the infrastructure plan as a political play rather than a true plan, though the industry group supports infrastructure development at large.

“Investment in infrastructure needs to be a priority, but this legislation appears to be less about improving infrastructure and a lot more about a political agenda, at the expense of sound economic policy that benefits all Americans,” Shay said.