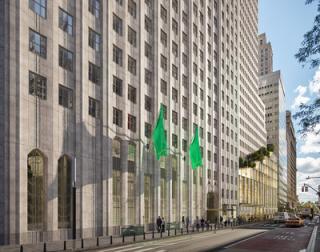 The luxury French department chain Printemps on Monday announced further details about its forthcoming location in New York City, which will mark the retailer’s first location in the United States.

Printemps’ new U.S. location will open in the city’s Financial District (FiDi) in One Wall Street, a 50-story tower. The company in a release said it chose the location, which first opened in 1931, because the neighborhood has become more residential, which Printemps said will allow it to serve both local customers and tourists alike.

More New York City residents have moved into the FiDi neighborhood — previously almost entirely associated with the finance industry and those who worked in it — as remote work became more popular due to the COVID-19 pandemic. Housing in FiDi is considered more affordable than in other desirable areas in the city, as The New York Post reported earlier this year.

"The U.S. is essential in our international development strategy and opening in New York offers high visibility and growth potential,” said Printemps Groupe CEO Jean-Marc Beallaiche, in a press release. “We think we can bring something unique, both to its engaged local consumer base and the strong tourist flows the city welcomes.

The store will highlight some of the nearly-century-old building’s historic features, including the Red Room, a large lobby designed by the Art Deco artist Hildreth Meière that features floor-to-ceiling mosaic tiles. The space originally functioned as a private banking hall and has been largely closed off to the public for decades, according to Untapped New York.

Beallaiche also said the U.S. was a “strategic e-commerce market” in the areas of luxury fashion, home and beauty, adding that the company planned to “pioneer a new format of experiential retail in this fast-changing and demanding market."

The company’s efforts in the U.S. will be led by Laura Lendrum, who was tapped to join as the CEO of Printemps America Inc. Lendrum previously worked as the president for the North American division of luxury brands Saint Laurent, Gucci and Ralph Lauren.

Printemps was founded in 1865 and has 20 locations across France. The company selected the Parisian interior designer Laura Gonzalez to work as the architect on the upcoming U.S. location. The company said Gonzalez will work to transform the 54,364-square-foot, two-story space into a storefront that combines the identities of Paris and New York.