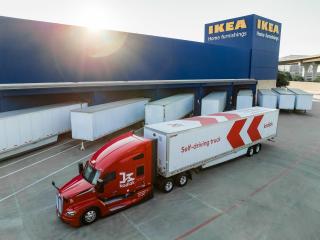 Ikea is testing self-driving trucks as part of a partnership with Kodiak Robotics to deliver furniture from its warehouse in Houston to a store near Dallas.

According to a report from Forbes, the Kodiak truck has been making the 300-mile journey between the cities seven days per week since August. While the trucks are autonomous, there is a backup driver who also oversees the truck's loading and unloading.

"We are proud to be working with Kodiak to achieve our ambitious goals of being at the forefront of innovation and building capabilities for future transportation," said Dariusz Mroczek, category area transport manager, Ikea supply chain operations, in a release. “Kodiak’s technology will contribute towards our objective to put the driver in focus in the transition towards automated transportation and towards our road safety agenda.”

Ikea and Kodiak agreed to a three-month pilot program, although there is the potential for the companies to extend the program, the Forbes report said. Neither company publicized the partnership until they completed an evaluation period.

“The main purpose is to get a better understanding of how Kodiak's autonomous driving technology contributes to increased road safety and better working conditions for truck drivers on the longer distances,” the release said.

Kodiak has been testing its autonomous trucks since 2019, according to a CNBC report, and it recently added a route between Dallas and Oklahoma City. Texas is favorable for self-driving pilot programs due to favorable regulations for the industry, the report said. According to the release, autonomous trucks are about 10% more fuel efficient than regular trucks.

Ikea is far from the first retailer to test autonomous trucks to transport their goods around the U.S. Walmart last year said it started using fully autonomous trucks from Gatik (without a safety driver) as part of its grocery business. The retailer said it used autonomous vehicles daily on a 7-mile loop between a dark store and one of its Neighborhood Market locations in Arkansas, according to a November 2021 release.

Gatik this year also said it was using autonomous vehicles to deliver Georgia-Pacific paper products to 34 Sam’s Club locations in the Dallas-Fort Worth area, according to a June release.

Kodiak said it hoped to enter a multi-year agreement with the Swedish furniture retailer, which included expanding the number of runs and locations where the technology was employed, according to Forbes.