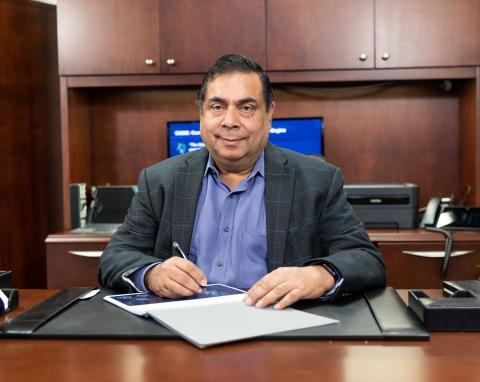 Dr. Pallab Chatterjee may not be a household name in the retail industry, but these days the veteran technology executive is having a major impact on how retail and consumer goods companies operate, work together and serve shoppers. As Chairman and CEO of Symphony RetailAI, Chatterjee leads a company at the forefront of developing artificial intelligence-enabled solutions that solve some of the industry’s thorniest challenges and change how work is being done.

“We are focused right now on four roles in retail; the category manager, marketing manager, store manager and supply chain manager. Our whole theme in retail is, how can we make people in each of these roles smarter to give our customers an unfair advantage,” Chatterjee said. “I have to give you an unfair advantage if you are my customer because if I don’t give you an advantage over your competitor why are you my customer?”

It is that mindset that led to the introduction of the industry’s first voice-enabled solution for category managers, a product known as CINDE, an acronym for Conversational INsights and Decision Engine. The company has also launched a virtual reality solution to help retailers evaluate the impact of store remodeling and merchandising decisions, a promotional planning solution for marketers and a supply chain-linked app for store managers and employees that helps direct work. AI underpins each of the company’s solutions along with a thought process that begins by taking a step back from a problem and asking, “what if?”

“We developed our CINDE product because I was hearing over and over again about category managers who don’t have time to do anything and whenever they wanted to know something analytical they sent a request out and would hear back in two weeks,” Chatterjee said. “We thought people are getting used to Alexa and Siri at home so why can’t there be a conversational interface at work.”

CINDE was born, giving category managers the ability to verbalize queries and receive rapid responses. The system was announced last fall and is in use with three retailers of significant scale, according to Chatterjee.

“What’s exciting is the quality of intelligence increases with the amount of users who work with it,” Chatterjee said.

The company also recently introduced a solution called SR Personalized MarketingAI, a predictive analytics engine designed to make it easy for retailers to deliver customized messages and offers to each shopper in real time by incorporating a 360-degree view of personal data. The solution is designed to streamline and improve the effectiveness of a personalization process that for many retailers can be highly manual and driven by rules-based algorithms.

Another area of focus where AI is expected to have an impact is at store level where compliance and execution issues are a perpetual challenge. Symphony RetailAI developed a mobile app that integrates with the supply chain to help direct employee work by predicting tasks that need attention.

“We are adding more intelligence to it now where an employee can just scan the shelf with a smartphone camera and it will recognize products in real time. Instead of guessing what work needs to be done the system will tell you whether something needs to be done,” Chatterjee said. “For example, is the planogram in the store what it is supposed to be, are prices correct, is the end cap properly set with the appropriate manufacturer’s product? We are seeing productivity increases in the range of 25% to 30% because of the usability of the technology compared to benchmark studies that looked at how long it takes to complete particular tasks.”

Another way AI and new technologies are being leveraged at Symphony RetailAI involves the store planning and merchandising process. Chatterjee looked at how much money was being spent on store remodeling and planogram resets without any real validation of the return on investment and thought there has to be a better way. As a result, the company developed SR Virtual Store Remodeling, a solution that enables retailers to optimize existing and new store layouts based on customer-driven design, research and testing analysis, and allows CPGs to analyze how products look and perform on the shelf.

“We’ve hit a little bit of nerve with that thing because it is expensive physically to do all this stuff,” Chatterjee said.

In relatively short order, Symphony RetailAI has transformed from what Chatterjee called a sleepy little company three years ago that was having difficulty recruiting, to that of an industry innovator gathering momentum and gaining a reputation as a facilitator of disruption.

The Road to Retail

To understand how Chatterjee got to where he is today, and the impact he is having on the retail industry, requires a trip back to India in the late 1960s. The field of solid-state electronics was blossoming at the time so he sought admittance to the prestigious Indian Institute of Technology (IIT). He and 250,000 other people took the entrance exam and 2,000 were accepted.

“It was a hard place to get into,” Chatterjee said, revealing a tendency for understatement.

He went on to receive a doctorate degree and graduate at the top of his class, achieving the unusual feat of earning both awards the school bestows for top academic performance and extracurricular involvement.

If Chatterjee had gained some notoriety at IIT, the situation was much different when he arrived at the University of Illinois in the fall of 1972. He recalled trudging a mile to class from his dorm room after an early season snowfall when a professor ask him why he wasn’t wearing a coat. He had arrived stateside with one small suitcase and a light jacket so the sympathetic professor directed him to the thrift shop in the basement of a local church where he obtained a coat suitable for Illinois’ harsh winters. That helped him acclimate to the weather, but there were other adjustments to make.

“There was nowhere to eat Indian food. There were a handful of Indian students similar to me working on their PhDs, but that was the only connection to the Indian community,” Chatterjee said.

Upon graduation with a master’s and PhD, Chatterjee landed a job at Texas Instruments in the research and development department where he spent the first 15 years of his 25-year career. He went on to distinguish himself in R&D, was named the company’s Chief Technology Officer and was elected into the National Academy of Engineering.

“Normally people receive that after they turn 70 or so but for whatever reason they gave it to me when I was about 41,” Chatterjee said. Having arrived at the pinnacle of the engineer field at a young age, Chatterjee thought to himself, “If I just coast now I can take the next 20 years of my life and keep doing the same thing.”

That thought didn’t last long because as someone with a desire to learn continuously, Chatterjee raised his hand when an opportunity arose to lead manufacturing at Texas Instruments.

“The operating guys thought, ‘What the hell is this ivory tower guy going to do for us,’ ” Chatterjee said recalling the transition, “but we had some good successes.”

More specifically, he led the company’s calculator business, which was dominant in the 1980s with products that today are still required for algebra, geometry and calculus students.

His career began to take a retail turn when the CEO of Texas Instruments at the time turned to Chatterjee for a major project.

“He basically cornered me into taking on the CIO job because we had a massive SAP implementation that I had been very critical of because of how we were progressing and the amount of money we were spending,” Chatterjee said. “We were the first company that went live with a single instance of SAP running in 56 countries and didn’t crash the company. That got me a little interested in software.”

During that time, the company also went live with a supply chain system from i2 Technologies and that piqued Chatterjee’s interest in the world of supply chain and demand forecasting. When Texas Instruments began divesting different parts of its business Chatterjee made the move to join i2, a company with a big retail practice that marked a stepping stone toward the world of food and consumer goods.

“It was one more turn where I went into something I didn’t know very much about,” Chatterjee said.

Chatterjee left i2 when the company was sold to JDA in 2010. He reconnected with Romesh Wadhwani, an entrepreneurial executive he had bought a company from while at i2. He had started a private equity firm called Symphony Technology Group (STG) and made two acquisitions. Through STG, Wadhwani bought Aldata in 2009 and EYC in 2010, both of whom were focused on food retailing and CPG, and needed an operating execu­tive to run them. Chatterjee took on the new challenge as Chairman for the companies that were renamed Symphony GOLD and Symphony EYC respectively.  Earlier this year those organizations were rebranded as divisions of Symphony RetailAI, as part of Wadhwani’s new venture, SymphonyAI, a group of companies that provide leading AI-centric solutions for transforming the business enterprise across multiple industries.

Focused on the Future

There isn’t much Chatterjee hasn’t been successful at during a career characterized by a willingness to take on new challenges, pursue learning and think differently about problem solving.

“My philosophy is you go to school to start your career, but whatever you learn, especially if you are on the technology side of things, is obsolete in three years,” Chatterjee said. That was certainly true in the world of semiconductors in 1970s, when as head of R&D at Texas Instruments, he had 800 PhD’s reporting to him. And it is equally true now of a retail industry swirling with disruption. “You need about eight college degree equivalent educations to stay competitive throughout your career.”

It is that exposure to new challenges and the need to continuously learn which Chatterjee said gets his juices flowing.

“I get much more energy if I have to expose myself to an area that maybe I don’t know anything about. If you are staying in one vertical all the time you get in the mold of group thinking,” Chatterjee said.

Retail and CPG has Chatterjee’s juices flowing these days because there are plenty of challenges where he can bring his engineer’s mindset for problem solving to bear. However, ask him to peer in the future and what sort of things have him intrigued and he mentions China’s continued ascent, the transparency of the blockchain’s distributed ledger and the Internet of Things. These are clearly areas where Chatterjee has been expending mental energy because he is able to cite precise statistics about China’s economy, overlay practical applications for blockchain and detail how AI can be brought to bear on massive data flows created by IoT devices.

“Put those three things together and you are living in a completely different world,” Chatterjee said, noting with a reference to his brain that the next big idea is, “in the sausage factory right now.”

China, the Blockchain and IoT will have to wait. Chatterjee and the growing team at Symphony RetailAI have their hands full anticipating the future and developing solutions for pain points that retailers and CPG companies don’t yet know they are going to have.

“If you ask customers what they need you don’t get breakthrough innovations, you get incremental gains,” Chatterjee said. “No one told Steve Jobs to make an iPhone with a camera and a touch screen.” RL 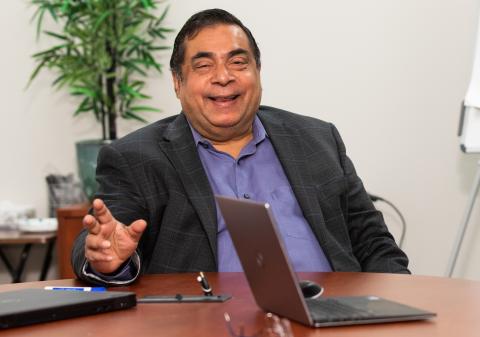