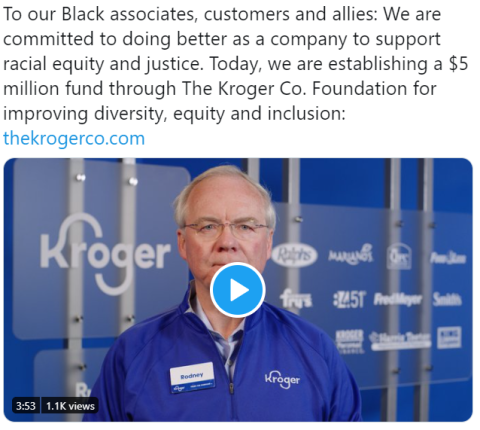 Retailers have been called into action after the death of George Floyd on Memorial Day has sparked protests worldwide and stimulated conversations on racial equity and social justice. The Kroger Co. is the latest grocer to put money behind the issues at hand, creating a $5 million fund through The Kroger Co. Foundation for improving diversity, equity and inclusion.

Along with this announcement, Kroger CEO Rodney McMullen delivered a video message via social media and the company's website.

"We share in feelings of sadness, fear and outrage. We must use our voice to express that we are against racism and injustice against the Black community. We can and we must do better as a company, community and country," he said. "It's my responsible to help Kroger be part of the solution."

McMullen mentioned the "senseless killings of George Floyd, Breonna Teylor and Ahmaud Arbery" in the video and said that Kroger is putting more channels in place for associates to be able to speak and be heard about their own experiences.

"This has been a moment of clarity and reflection that we all have deeper work to do," McMullen said.

Kroger's African American Associate Resource Group has put together the "Allyship Guide: From Awareness to Advocacy," which has been distributed throughout the company and is downloadable online.

Kroger is not the first grocer pledging monetary amounts this week. Texas-based H-E-B, No. 17 on The PG 100, Progressive Grocer's list of the top food retailers in North America, created a $1 million fund to address racial inequalities and injustices, while Minneapolis-based Target, No. 7 on the list, has committed $10 million to rebuilding efforts and advancing social justice.