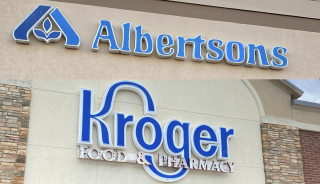 The major grocery store owners Kroger and Albertsons, which individually have several popular grocery brands in the U.S., announced a plan to merge on Oct. 14.

Kroger in a release said it reached a deal to purchase Albertsons for $34.10 per share, which puts the deal’s price tag at $24.6 Billion. As part of the deal, Kroger will assume all of Albertson’s $4.7 billion net debt, according to the release. Kroger said it expects to invest $1.3 billion in Alberson’s stores.

"We are bringing together two purpose-driven organizations to deliver superior value to customers, associates, communities and shareholders," said Rodney McMullen, Kroger chairman and CEO, in a release. "Albertsons Cos. brings a complementary footprint and operates in several parts of the country with very few or no Kroger stores. This merger advances our commitment to build a more equitable and sustainable food system by expanding our footprint into new geographies to serve more of America with fresh and affordable food and accelerates our position as a more compelling alternative to larger and non-union competitors.”

Rodney will continue to serve in the same role at the new combined company, the release said.

The boards of both companies unanimously supported the merger, which will need regulatory approval before it is complete.

“If a deal is announced, expect plenty of antitrust scrutiny as the two grocers have plenty of store overlap in several of the markets they compete in,” said CFRA research analyst Arun Sundaram in a research note on Thursday, according to the Cincinnati Business Courier. Also, regulators are likely to question whether consolidation could stifle competition and drive food prices even higher.”

Kroger earlier this year launched a series of digital initiatives, Retail Leader previously reported. It leveraged OneView’s headless Unified Commerce platform and capabilities to finalize its digital orders and power its e-commerce pickup and delivery experiences at 1,000 Kroger locations. Grocery retailers, like Kroger, expanded online and pick-up options during the COVID-19 pandemic. The grocer in 2018 partnered with Ocado to help it build fulfillment centers to fulfill online grocery orders. It currently has centers in just under a dozen states, according to Ocado.