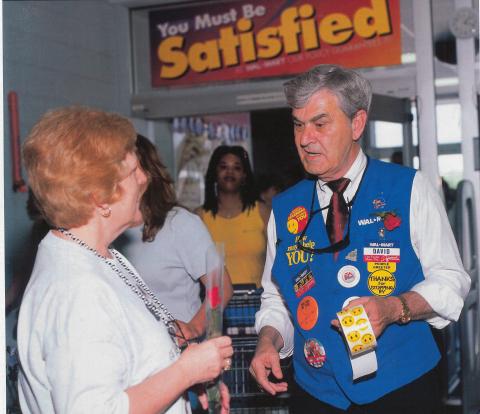 Former Walmart CEO David Glass in 1998 while working as a people greeter at a supercenter in Kissimmee, Fl., that earned "store of the year" honors as one of the company's highest volume locations.

David Glass, 84, the former president and CEO of Walmart and architect of the company’s dramatic growth in food retailing, died on January 9 due to complications related to pneumonia, according to a statement from the Glass family.

Glass served as president and CEO of Walmart from 1988 to 2000 and had as great an impact on the retail industry as any executive before or since. Although he is seldom mentioned along with other industry icons, those who competed against Glass during Walmart’s meteoric rise knew his name well. Glass joined Walmart in 1976 as CFO and became president and COO in 1984. A U.S. Army veteran, he acquired the Kansas City Royals baseball team upon his retirement in 2000 and led that organization to two successive World Series championships.

“More than anyone beyond Sam Walton, David Glass is responsible for making Walmart the company it is today,” said former Walmart chairman and Sam Walton’s eldest son Rob Walton.

"Due to his authentic humility, we think David Glass may be the most under-appreciated CEO in the history of business,” said Walmart president and CEO Doug McMillon. “The choices he made and the results of the company reflect his wisdom, dedication and servant leadership. We will miss him immensely and are eternally grateful."

It’s hard to argue with that assessment given Walmart’s accomplishments during Glass’ tenure as CEO. He assumed the top job following a year in which Walmart’s 1,114 stores in 23 states generated sales of $15.9 billion. The company had also just opened its first two Hypermarket USA stores, a predecessor to the supercenter concept that marked Walmart’s entry into food retailing. By the time Glass stepped down as CEO in early 2000, Walmart operated 1,801 stores, 721 of which were supercenters, Sam’s Club had expanded dramatically and international operations were making a meaningful contribution to the company’s annual sales of $165 billion.

“When we launched the supercenter concept, everyone said it wouldn’t work because we didn’t know anything about food,” Glass wrote in his final letter to shareholders in Walmart’s 2000 annual report. “And indeed, our first supercenter in Washington, Mo., wasn’t as sharp as the competition when it came to food. But we learned from our competitors and made continuous improvement within the company.”

The refinement and subsequent accelerated rollout of supercenters during the 12 year stretch when Glass led Walmart stands as one of the more remarkable periods in the history of retail. In his final year at the helm, Walmart opened 157 supercenters, but in subsequent years that figure would exceed 200 units annually for more than a decade. Expansion of the supercenter format and a supporting food distribution infrastructure would result in tremendous market share gains as Walmart sold ever increasing volumes of food and consumables, fueling consolidation among retail competitors and CPG suppliers alike. Today, Walmart operates 3,570 supercenters in the U.S. and in mid-February will report annual sales in excess of $500 billion.

Glass’ lesser known contribution to Walmart’s success and impact on retail overall related to the company’s sharing of information with suppliers through a proprietary platform called Retail Link. It was during his time prior to becoming CEO that Glass led development of the Retail Link system which marked a philosophical turning point in how retailers treated suppliers as partners to serve a mutual customer. What made the concept unique is that Walmart gave suppliers access to point of sale data which ensured merchants and suppliers were working with one version of the truth as they devised volume building strategies. Many retailers at the time saw their POS data as a profit center and charged fees to access the information which inhibited its usage. Walmart’s approach unleashed the creativity of suppliers to proactively develop sales generating programs by uncovering insights in big data, something all retailers talk about today.

The Glass family will hold a public "Celebration of Life" in his honor on Monday, January 27, 2020, at 1 p.m. the Northwest Arkansas Fellowship Bible Church, 1051 W. Pleasant Grove Road in Rogers AR.