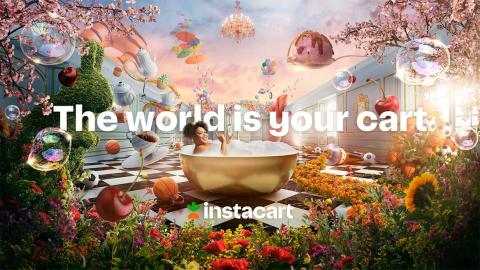 Instacart is leveraging the star power of singer and flutist Lizzo for its latest brand campaign, which highlights a collection of new shopping content and digital features meant to inspire discoverability.

Instacart says these mobile experiences, including new product feature spots, are oriented around discovery and enable shoppers to see a new product, "cart" it and get their new discoveries delivered in as little as an hour, according to a news release announcing the campaign.

“The World is Your Cart" campaign kicked off with a one-minute film advertisement featuring a remix to "The Sign," the first track from Lizzo's new album Special. The film starts off by showing Lizzo using the Instacart app in a bathtub listening to remix. It progresses with her surroundings turning into a “fantastical” scene covered with cherry blossom trees as she adds items to her digital cart.

Another digital experience bringing the campaign to life is Carts, a new feature enabling retailers, pop culture personalities and creators to create collections of shoppable, curated content, helping consumers discover products. Carts groups a range of categories including “Self-Care Sunday” and “Late Night Noms” to “Date Night” and Lizzo's own exclusive shoppable Cart of her favorite vegan treats and products from her role in "The World is Your Cart" video ad in a single hub. Carts also surface in the recently launched Home Feed at the center of the Instacart app.

Instacart has taken an omnichannel approach with the campaign, beginning Aug. 28 when the retailer took out a full-page center spread advertisement in The New York Times Sunday Edition featuring Lizzo and the creative. Instacart was also an official sponsor of the 2022 MTV Video Music Awards, where the campaign's film made its linear television premiere, following an onstage performance by Lizzo.

"A shoot where I get to sit in a bubble bath and shop all day? Sign me up Instacart," said Lizzo in the release. "This spot is so dynamic, and people will see me shopping and imagining what each item could lead to, from a desertscape of Takis — which are always in my cart — to a rain shower of cherries. I'm also excited to share my shoppable Cart, which includes so many of my favorite things.”

This launch is the latest example of Instacart adding inspirational shopping experiences across the Instacart app, including Brand Pages, Shoppable Display, and Shoppable Video ad formats, for its roughly 5,500 CPG brand partners.

In addition, by building Instacart’s Shoppable Recipes integration from earlier this year, the platform is also seeking more recipe creators and food-focused developers to make their websites commerce-enabled. With the integration of Recipe Maker, publishers and bloggers can make their websites instantly shoppable on Instacart — including Hearst, which already uses Instacart’s widget for its food properties including Delish. Instacart is also searching for a developer API and widget public to support a broader ecosystem of partners, according to the release.

Instacart is also launching a monetization tool for its content partners. Instacart Tastemakers is its new affiliate network for creators, publishers and developers to help them monetize purchases that their audiences make on Instacart. Over the next few months, the company will introduce more ways for partners to monetize their content by leveraging the full Shoppable Recipes ecosystem Instacart is creating for brands and retailers.

"The World is Your Cart" was created by Instacart's in-house marketing team in partnership with agencies Droga5 and Mayflower, and brought to life by director Sam Brown.

"'The World is Your Cart' is a rallying cry that reminds us of the abundant possibilities of each product we add to our Carts and satiates our curiosity by enabling others' Carts to spark our own creativity," said Laura Jones, chief marketing officer at Instacart, in the release. "In addition to capturing these possibilities across our new creative platform, we're making them a reality by offering consumers the chance to discover new things across the Instacart app.”