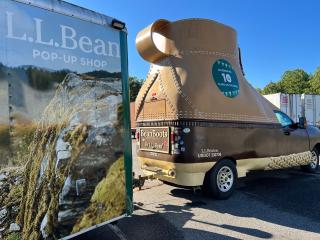 L.L. Bean plans to take its “Bootmobile” on the road in an effort to bring a selection of its products to around three dozen communities across the U.S.

Launching in late September, the tour is in celebration of the company’s 110th anniversary, and it will begin and end in Maine, where L.L. Bean is headquartered. In total, the Bootmobile will make stops during a four-month journey in more than 35 communities and college campuses where the company does not currently have a physical retail presence, L.L. Bean shared with Retail Leader.

The Bootmobile — fashioned in the likeness of the company’s iconic duck boot — was launched a decade ago when L.L. Bean celebrated its centennial anniversary.  The locations on the forthcoming tour were selected using e-commerce data that indicated an interest in L.L. Bean products, the company said. A community’s physical distance from an L.L. Bean retail store was also a factor. In total, L.L. Bean operates 56 stores across 19 states.

The Bootmobile will feature some of the company’s most iconic products, including its Bean Boot and its Boat and Tote bag.

“We’re thrilled to be able to engage with our customers who may not have convenient access to one of our retail locations, and we’re excited to share another holiday season with some of our company’s biggest fans,” Parker said.

The company’s effort to offer products via a direct-to-consumer (DTC) mobile selling tour became a “critical sales channel” during the COVID-19 pandemic, L.L. Bean told Retail Leader. It started its mobile selling program in 2017 and in 2021 recorded “the strongest sales performance in program history,” the company said.

In recent years, other retailers have also experimented with mobile store formats in an effort to meet consumers where they are. DTC retailer Bonobos in 2018 brought a decked-out airstream to college campuses to sell outfits to soon-to-be graduates. In 2021, Dolce & Gabbana also used a custom airstream as a pop-up shop to sell an assortment of its products in the Hamptons, Harper's Bazaar reported.

Patagonia in 2015 began taking its sustainability-focused Worn Wear initiative on the road, bringing it to coffee shops, farmers' markets and trailheads across the U.S. The company offered free garment repair and sold used Patagonia clothing items. The company went on a similar tour of college campuses in 2017.

In 2021, Louis Vuitton expanded its LV By Appointment program to the West Coast after launching the effort in New York the year prior, according to Robb Report. The program, meant to serve customers at home during the pandemic, brought a mobile boutique with a selection of goods tailored to individual customer preferences to their homes.