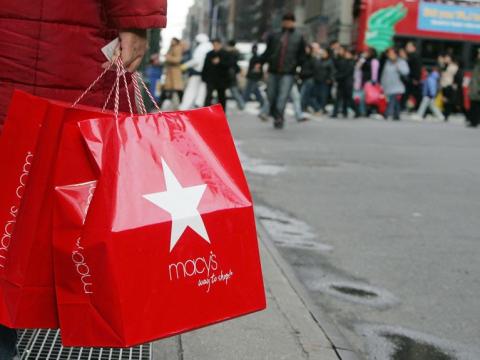 Macy's operates approximately 690 department stores under the nameplates Macy’s and Bloomingdale’s, and more than 170 specialty stores that include Bloomingdale’s The Outlet, Bluemercury, Macy’s Backstage and STORY.

Investments in technology, stores and loyalty programs weren’t enough for Macy's to lift sales in the second quarter.

The department store retailer said same store sales were flat for the second quarter ended Aug. 4, compared with the same quarter the previous year. Excluding the shift of a promotional event to the first quarter, the company said comparable sales rose 2.9% including licensed departments.

The flat comps come after the company reported earlier this year that same store sales climbed 4.2 percent, reversing a downward spiral over the previous four years.

Total sales for the period fell 1.1% to $5.57 billion, in part because of stores that were closed last year. Profit rose 50% to $166 million, compared with $111 million a year earlier. Macy’s also raised its sales and earning guidance for the year.

“Macy's, Inc. delivered strong performance in the first half of the year, and we are pleased to report our third consecutive quarter of comparable sales growth. Macy's, Bloomingdale's and Bluemercury all performed well. It is encouraging to see the continued strengthening of our brick & mortar business where we saw trend improvements across the portfolio, led by our Growth50 stores. The combination of healthy stores, robust e-commerce and a great mobile experience is Macy's recipe for success. We are focused on improving our customer journey every step of the way because we know that our customers expect a great experience whenever and wherever they engage with our brands,” said Jeff Gennette, Macy's, Inc. chairman and chief executive officer. “We also continue to be disciplined with inventory management, which allows us to give our customers more fashion and freshness, while increasing sales and improving gross margin.”

Macy’s has been investing in technology, closing stores, opening more of its Backstage off-price banner and selling or leasing out real estate to fight off competitors.

It launched a revamped loyalty program in October 2017, which executives on Wednesday said would result in a bigger hit from delivery expenses to third-quarter margins this year. It also has been focused on launching mobile checkout apps to all stores.

Macy's operates approximately 690 department stores under the nameplates Macy’s and Bloomingdale’s, and more than 170 specialty stores that include Bloomingdale’s The Outlet, Bluemercury, Macy’s Backstage and STORY. Macy’s, Inc. operates stores in 44 states, the District of Columbia, Guam and Puerto Rico, as well as macys.com, bloomingdales.com and bluemercury.com.