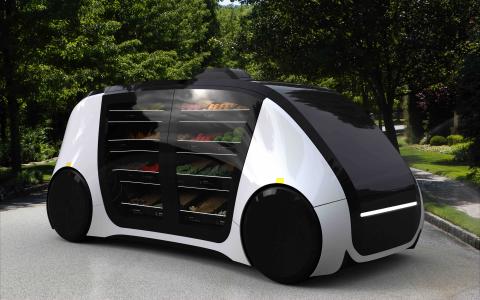 Coming to a neighborhood near year: the autonomous grocery store

An autonomous mobile grocery store called “Robomart” could make its U.S. debut as early as this summer if Robomart founder Ali Ahmed has his way.

Ahmed and Robomart are building a fleet of fully autonomous, on-demand, self-driving stores to license to retailers in what is billed as the world's most affordable and convenient home grocery service. Consumers just tap a button and the driverless store comes to them, so they can shop for the freshest produce and other groceries right at their doorstep, at the lowest prices since there's no delivery fee, according to Ahmed.

He's hoping to tap into two major trends affecting the food retailing world. For starters, although fresh produce accounts for a larger percentage of food retailers’ overall sales, only about 5% of sales have moved online, according to Ahmed. Meanwhile, research conducted by Robomart shows that 85% of women between the ages of 26 and 44 shows that 85% won’t buy fruits and vegetables online because they believe home delivery is too expensive and that they wanted to pick their own produce. Almost 65% said they would order a Robomart more than once a week.

The company has built its first prototype and will be unveiling the vehicle at CES on Jan. 8. The Santa Clara, Calif.-based company has begun work on fully functional Robomarts, which it hopes to deploy in a pilot by late summer 2018.

“We're in the process of getting our Autonomous Vehicle Testing Permit and License from the Department of Motor Vehicles in California so that we can deploy fully driverless vehicles on public roads in California,” Ahmed said.

Should necessary approvals be obtained, the Robomart shopper experience will be truly unique. The futuristic looking vehicles with oversize wheels rolls up to a home and offer between 50 and 100 different items inside the 70 cubic food refrigerated space. Robomart provides the vehicle as a white label offering to retailers who determine the assortment which is displayed on stadium style shelves similar to those found in a typical produce department.

“We envision separate Robomarts for each major fresh category but assortment will be up to our retail customer,” Ahmed said. “Consumers will register on their retailer’s app and save their details including payment information. After requesting a Robomart they then have a full checkout free experience when shopping. They simply unlock the doors, take what they need, and then lock the doors and send it on its way.”

Robomart tracks what customers have taken using its patent pending "grab and go" checkout free technology and then receive a receipt on behalf of the retailer who has licensed the Robomart.

The vehicle has a range of 80 miles and a top speed of 25 miles per hour and Ahmed considers it more of a shopping experience that a simple delivery vehicle, which is the case with earlier version of autonomous vehicles.

“We compete against sidewalk delivery robots. Our robots are much larger, house a bigger selection, operate on roads not sidewalks and offer an entire checkout-free, in-person shopping experience rather than just being a delivery vehicle,” Ahmed said. “We see ourselves as the ‘Boeing’ for this new industry we are pioneering of fully autonomous, self-driving stores.”