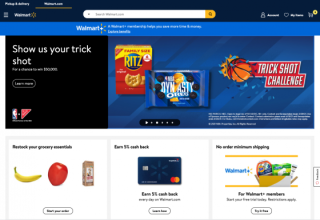 The ad, which was spotted by the Path to Purchase Institute April 7, links to a promotional website by Prize Logic and asks consumers to upload a video of themselves performing trick shots. The contest will be judged by a panel who will pick a contest winner to win the grand prize. Another 30 entrants will be picked by the panel as semi-finalists who will be eligible for public voting to win $25,000. The trick shot video contest is open from March 29 through April 18, while a sweepstakes portion runs from March 29 through April 30, with 20 $500 NBA Store gift cards up for grabs.

The game reflects an emerging trend across retail media that brings together retail and entertainment. Trick-shot contests have been around for several years, even before Kellogg’s Pringles teamed up with the YouTube star Dude Perfect in 2014 for a trick-shot promotion that boosted Walmart sales in 2014. However, more brands are continually looking for ways to advertise within entertainment platforms, including streaming games and music, in addition to retail media networks.

Planters, owned by Kraft Heinz Foods, also recently completed its own trick shot contest including a $50,000 grand prize, with entrants uploading a video of themselves between Feb. 26 and April 5 using specific hashtags across Twitter, Instagram or TikTok. Two finalists were selected by a panel of judges, where one finalist was selected as the grand-prize winner through public voting that ended April 12.

The website for Nabisco’s Trick Shot Challenge also features ads for a variety of Nabisco, Trident and Sour Patch Kids products that link to Walmart’s online pickup and delivery pages.

See the full story at the Path to Purchase Institute.