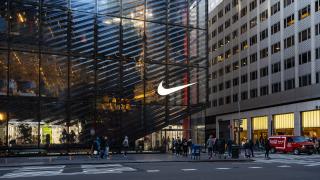 Nike this week announced Swoosh, a digital marketplace designed to allow the collection, trading and co-creation of virtual goods.

The platform — branded as “.SWOOSH” — will allow Nike Members to collect and eventually co-create virtual creations, like interactive shoes and jerseys, according to a Nov. 14 release. Registration for the website, which is currently in beta testing, will begin later this month, according to the retailer.

Nike said it planned to make diversity a cornerstone of the platform by inviting a “diverse, equitable” community ahead of the official launch of the platform next year. Nike said it would prioritize working with local communities in the U.S. and in some countries in Europe to help members build the skills to use the platform.

Its first digital collection on Swoosh will also launch in 2023, according to the release. Once the collection drops next year, Nike said that Swoosh members will be able to enter a challenge where winners will have the opportunity to co-create a virtual product with the retailer. Winners will receive royalties on the product they help Nike create, according to the release.

“We are shaping a marketplace of the future with an accessible platform for the Web 3-curious," said Ron Faris, GM of Nike Virtual Studios, in the release. "In this new space, the Swoosh community and Nike can create, share and benefit together.”

According to the release, members of Swoosh will eventually be able to virtually wear the clothing items in digital games and other “immersive experiences.” The retailer said Swoosh members will also be able to access real-world benefits, including physical products and events like “intimate conversations with athletes or designers.”

The platform is based on Web3, meaning that it uses blockchain technology, which Nike says will help it “offer an inclusive, equitable place for athletes, creators, collectors and consumers to design and own the future of sport.”

As part of Swoosh, Nike launched a blog on Medium that will allow its customers to learn more about Swoosh. According to the inaugural blog post, Swoosh members will eventually be able to trade their virtual products with other members on the platform.

Numerous retailers, from Ralph Lauren to Walmart, have launched digital collections or other virtual experiences for their fans and shoppers. The collections come as retailers attempt to navigate the metaverse and appeal to younger consumers on digital platforms where they congregate, like Fortnite and Roblox.