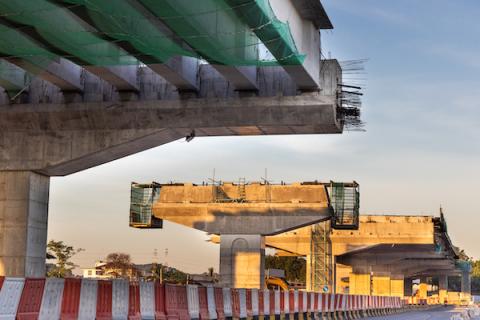 Retail is one industry impacted by the quality of infrastructure, from ports and shipping to stocking supplies and even how consumers use transportation to reach retailers. The industry has been vocal about its support for an infrastructure bill, however some groups were initially wary of President Joe Biden’s proposal to increase taxes to help fund the project.

“NRF is encouraged by tonight’s quick and decisive action in the Senate to invoke cloture on the Bipartisan Infrastructure Deal, clearing the path for a full Senate vote,” National Retail Federation President and CEO Matthew Shay said in a statement July 27. “Once passed, this historic piece of legislation will serve to revitalize and invigorate the U.S. infrastructure system that so many businesses depend on.”

NRF has pushed for any infrastructure deal to be funded through user fees rather than higher taxes, while acknowledging that retailers are likely to be a top benefactor from higher quality infrastructure in the U.S.

“Retailers across the country rely on the American supply chain, and the millions of jobs it supports, to move billions of dollars’ worth of goods and products to consumers across the nation each day,” Shay said. “An improved system will help alleviate many of the ongoing supply chain challenges that retailers continue to face today.”

The current $550 billion deal is well below Biden’s original proposed plan, which was worth roughly $2.3 trillion and included investments in labor as well, such as home care workers. However, the bill does include the largest federal transportation investment in history, according to the White House.

“This is the largest Federal investment in public transit in history, and devotes a larger share of funds from surface transportation reauthorization to transit in the history of the programs,” the White House stated Wednesday. “It will repair and upgrade aging infrastructure, modernize bus and rail fleets, make stations accessible to all users, and bring transit service to new communities.”

Following approval in the Senate, the bill will move to the House for a vote before reaching Biden’s desk. Biden has previously signaled that he will only sign a pared-down version of his infrastructure plan if Democrats can use their majority to pass a second piece of legislation to meet his other investment priorities. House Democrats are also expected to make changes to the Senate’s version of the bill. A second, $3.5 trillion bill that includes extra investments, like child care, health care and climate change actions, is facing more issues but could get pushed through the reconciliation process without bipartisan support.

The retail industry is hopeful a bipartisan bill will be signed into law in the near future for hard infrastructure.

“We strongly support this deal and its investment in core infrastructure, including roads, bridges and ports that are critical to our nation’s supply chain and global competitiveness,” Shay said. “We look forward to swift passage in the Senate and encourage the House to follow suit.”