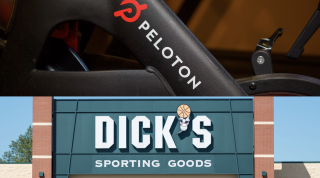 Peloton will now sell its exercise equipment through Dick’s Sporting Goods as the brand continues to shift away from its exclusively direct-to-consumers (DTC) strategy.

The new deal with Dick’s covers most of Peloton’s equipment, including its standard Bike, the Bike+, the Tread and the Guide, according to a release. The products will be sold at more than 100 Dick’s locations and will be available on its e-commerce platform, the retailers said. Customers who order the products through Dick’s will still have the products delivered by Peloton’s existing home delivery service, according to the release.

"This partnership is a natural fit for our brand and our member acquisition goals," said Jen Parker, Peloton’s senior vice president of global direct sales, in the release. "Dick’s is a consumer-beloved brand with a large, incremental customer base, offering tremendous upside for us to reach broader audiences and attract potential new members. Retail remains a critical touchpoint, and we want to provide the in-store experience that many current and prospective members still covet."

Peloton previously sold its products solely through its own DTC channels, a strategy that the company has re-evaluated amid financial woes. The fitness equipment retailer soared during the COVID-19 pandemic but has since faltered. It reported $1.2 billion in quarterly losses in August, and numerous members of its leadership team have recently departed the company.

Earlier this year, Peloton’s founder John Foley, its CEO of a decade, stepped down and the company eliminated 2,800 jobs — roughly 20% of its corporate workforce, Retail Leaderreported. Foley resigned from his role as executive chairman of Peloton earlier in September.

Peloton in August began selling some of its exercise equipment, accessories and apparel on Amazon in the U.S. The agreement included its standard bike and training device, the Peloton Guide. The brand’s other products, like the more expensive Bike+, were not part of the Amazon partnership. It was the retailer’s first foray outside of the DTC model it had employed since it launched in 2012.

Retailers that sell their products solely or mostly through DTC channels have partnered with big retailers, like Dick’s. The Swiss shoe brand On has for instance partnered with stores like Dick’s, Foot Locker, REI and Nordstrom, according to Footwear News. DTC Brands like Harry’s, Casper, and Quip sell their products at Target stores, while other DTC retailers like skin care brand Bubble and the razor brand Billie have chosen to partner with Walmart, Insider reported.

"Peloton is a powerful brand with a very loyal following and a product mix that's compelling for any fitness enthusiast," said Will Swisher, senior vice president of merchandising hardlines at Dick’s, in a release. "Being able to offer Peloton to our athletes —and to provide an in-store experience for them to see and test products — gives us and Peloton extended reach into the fitness market."