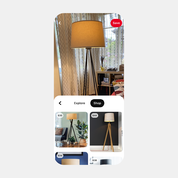 Visual shopping has gained steam during the pandemic, as a new Pinterest tool demonstrates.

Retail keeps getting more visual, and Pinterest has provided fresh evidence of how that shift is happening via a new service designed to enable more shopping via product images.

The new service from the social media operator enables shoppers on Pinterest to use its Lens camera tool to find products that are available for sale on the platform. Here’s how Pinterest described the new feature: “Just click the camera in the search bar, snap or upload a photo, and see a ‘Shop’ tab with a feed of shoppable Pins based on the in-stock products we've identified in that image. Every Product Pin links directly to the checkout page on the retailer's site.”

More specifically, a shopper on Pinterest who wants to replace, say, her old running shoes with a new pair could use the new tool to shop in-stock products that match the image of those shoes. “You can also upload a screenshot you’ve snapped from a blog or an older photo from your camera roll, and Lens will tell you what it is and where you can purchase,” Pinterest said. “Some of the top-shopped products with Lens are shirts & tops, dresses, shoes, jackets and pants.”

The pandemic has offered new fuel for the visual commerce trend, Amy Vener, Pinterest's global head of retail strategy and marketing, told Retailer Leader on Wednesday. “While it’s been harder to physically browse the aisles of stores over the past few months, people are increasingly coming to Pinterest to visually search and shop the online catalogs of retailers,” she said.

The most popular products for those visual searches are also among some of the most personal items that consumers can buy. “Around half of the items snapped through Lens belong to the fashion or home decor category,” Vener said. “In the past few months, we have also seen increasing searches on Pinterest for at-home beauty products such as press-on nails (+30%), while surprisingly, searches related to sweatpants have decreased 12% from February to April. Meanwhile, ‘home office’ searches are the highest they’ve ever been, growing 2.7x from February to April.”

The launch of this new Pinterest tool comes as the platform reports that the number of visual searches made via the Pinterest camera has increased three-fold over the last year. The launch also comes as more retailers and marketers deploy visual commerce technology to win over consumers all but attached to their mobile phones, and increasingly comfortable with shopping from multiple channels and with less and less friction.

Expect more such efforts in the wider retail space, a trend driven not only by better technology but also the need for merchants to offer more personalized and efficient shopping experiences for consumers. “The work we're doing across areas like camera search and object recognition is unique as it's powered by a mix of (artificial intelligence) and human curation,” Vener said. “Visual search has extended discovery not only across online to off, but allowed for Pinners to dive into any Pin they see on Pinterest and search further.”

As well, the fledgling deployment of 5G mobile network technology promises to also up the ante when it come to visual forms of marketing and retail. Indeed, it’s not hard to find optimistic predications about the rise of augmented and virtual reality in the retail space as 5G gains traction over the next few years, given the faster, more robust connectivity promised by it.

“Retailers like to vaunt their forays into augmented and virtual reality, but current 4G connectivity isn’t fast enough to scale these capabilities to all mobile users,” is how one representative analysis put it. “Many (augmented reality) experiments are still considered proof-of-concept, but standardizing 5G will undoubtedly accelerate the mainstreaming of connected retail.”

For now, the new Pinterest tool, and its broader visual commerce effort, could help point the way forward in this emerging area of digital commerce and marketing. “While you have your Lens camera open, click “try on” to use augmented reality to test out different shoppable lip colors from the comfort of your home,” Pinterest offered as an example of current capabilities that could become much more mainstream over the coming months.

Further developments are sure to follow in this area of retail and marketing. “Visual search is one of the fastest-growing products at Pinterest, with hundreds of millions of searches per month, and we believe will soon be more important to retail than traditional text/voice search,” Vener told Retail Leader.