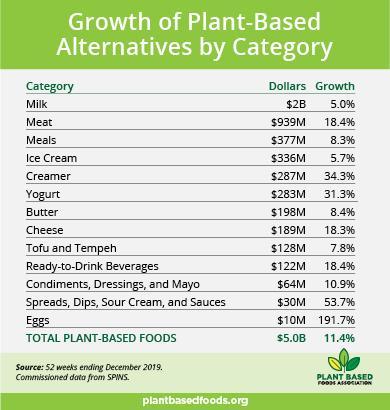 Americans’ changing dietary habits are reflected in new data from the Plant Based Food Association (PBFA) and The Good Food Institute (GFI) showing U.S. retail sales of plant-based foods increased 11.4% last year to $5 billion. During that same period, the total U.S. retail food market grew 2.2% in dollar sales and was flat in unit sales, according to PBFA and GFI data.

“Plant-based foods remain a growth engine, up 29% over the last two years,” according Julie Emmet, PBFA’s senior director of retail partnerships. “Growth is fueled by innovation in categories across the store, and retailers are responding by expanding shelf space to satisfy the rapidly expanding consumer base seeking more plant-based foods.”

Naturally, the PBFA and GFI don’t see it that way. Caroline Bushnell, GFI’s associate director of corporate engagement maintains plant-based overall is a lasting trend that will gain power over time.

"We see a steady rise in plant-based products year over year across regions, which indicates that this is not a bubble or a fad, but a real change in consumer behavior,” according to Bushnell. “Shifting consumer values have created a favorable market for plant-based foods, which have significantly outpaced overall grocery sales increases for three years running, making plant-based foods a growth engine for both manufacturers and retailers.”

Of course, percentages can be deceiving when the increase is on a small base. Look only at the meat category overall (refrigerated, frozen, deli) sales of $83.8 billion still dwarf $760 billion plant-based segment by a huge margin.

What the plant-based penetration rate becomes over time is the subject of some debate within the meat industry. For example, eating conventional meat remains the norm while the percentage of households identifying as vegan or vegetarian has remained around 5% for the past 15 years. Plant-based growth is also challenge by issues of taste. Data presented in the annual Power of Meat research presented at the Annual Meat Conference showed that purchasers of plant-based meat ranked “taste” as the fifth most important reason.