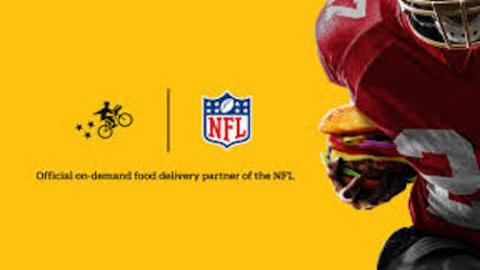 This marks the first NFL sponsorship deal with an on-demand delivery service.

As pro football starts a new season — with pandemic restrictions on attendance — Postmates is getting into the game.

The company, about to be bought by Uber, said it has become the official on-demand food delivery partner of the NFL.

Such deals are typically less than newsworthy. But this is the first time the league has inked a sponsorship contract with such a service. Postmates and its rivals are enjoying massive growth during the pandemic, and there is little doubt that their services will be called upon often by fans over the upcoming 17 weeks of scheduled regular season games, plus the playoffs.

According to Postmates, the deal with the NFL will bring special promotions throughout the season. As well, the company is working with the NFL on what Postmates calls social impact initiatives, beginning with a donation to frontline workers.

To kick off the season on Thursday night, Postmates has teamed up with Kansas City Chiefs quarterback Patrick Mahomes’s foundation, 15 and the Mahomies, to deliver meals to frontline healthcare workers at the Ben Taub Hospital in Houston (the Houston Texans take on the Chiefs in the season’s first game). Meanwhile, Texans quarterback Deshaun Watson will use Postmates to deliver meals to frontline workers at Truman Medical Center Hospital Hill in Kansas City.

“People across the country aren’t just ready to order their favorite game day foods, they are eagerly awaiting the return of football,” said Eric Edge, SVP, marketing and communications for Postmates. “While most fans won’t be able to physically go to the game, this exclusive partnership with the NFL allows us to bring the game day experience, and a few surprises throughout the season, directly to fans.”

Indeed, this year promises to produce even more armchair quarterbacks then would normally be the case, given the ongoing efforts to contain the virus. And that could help Postmates and other food delivery services — whether fans are ordering pizza, subs, wings from quick service restaurants, or taking delivery of big grocery orders to replace the spreads often found at bars on football Sundays.

“Fans will be watching NFL football this season from their couch more than ever before, so teaming up with Postmates as the first official on-demand food delivery partner of the NFL was a perfect combination,” said Nana-Yaw Asamoah, vice president of business development for the NFL. “We’re excited for Postmates to deliver game day food favorites and special surprises to our fans’ doorsteps throughout the year.”

To be sure, delivery services were on the rise before the pandemic, as data from Rakuten Intelligence demonstrates.

For instance, it found that for the most recent Super Bowl — which took place on Feb. 2, an era that people have started to call the “Before Time” — “consumers across the country were ordering from food delivery services, like UberEats and GrubHub, with orders up 41 percent on Super Bowl Sunday from the previous Sunday, and up 53 percent from last year's Big Game.”

Get ready for even more delivery service growth in the coming weeks — and, of course, some new pro sports action as well.