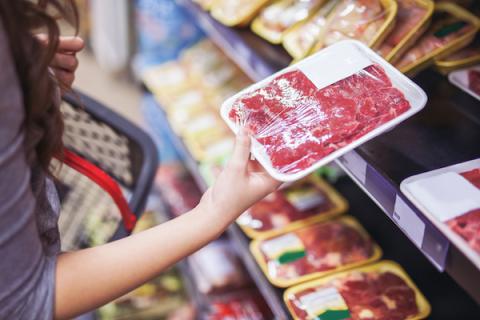 A whopping 82% of consumers feel that groceries are more expensive, overwhelmingly in meat and seafood, according to 84.51°, the retail data science, insights and media business of Kroger.  84.51° conducted a January survey of 400 customers who have shopped at a Kroger banner in the past three months.That’s up from 66% last year, Barbara Connors, vice president of commercial insights at 84.51°, told Retail Leader. 84.51° surveys customers every month.

“That’s a key pivot point––moving from a sense of frustration to changing behavior as a result,” she told RL.

The survey comes after inflation reached 7% in 2021, according to the U.S. Bureau of Labor Statistics. That’s a 39-year high, leaving consumers feeling the sting of higher prices.

The higher prices are leading consumers to switch up their behaviors at the store. Just 10% aren’t changing their shopping habits, even if they are noticing higher prices, according to 84.51°.

“This is just another example in which we found people are really creative in stretching their dollars,” Connors told RL. “We saw in [our] recent survey that 30% [of consumers] are buying less meat, and 36% are trying to buy cheaper cuts. They’re buying the same amount, but stretching dollars. Forty-three percent are getting creative with recipes, such as a dish with less meat required.”

Even though shoppers claim they would cut back on certain categories as a result of increasing prices, sales in dollars and units per household have remained flat across departments, 84.51° found.

Unfortunately, the higher prices may be here to stay, meaning grocers will need to keep a close eye on how consumers are reacting. Grocers, along with retailers in other sectors, are still grappling with supply chain challenges exacerbated by the COVID-19 pandemic, partly driving prices up. At the same time, demand hasn’t gone down because supply constraints have happened alongside higher prices.

“I think [grocers] are concerned,” Connors said “The smart ones are monitoring this, because inflation is not a trend that is likely to go away anytime soon. We've been monitoring for six months and it's impacting everyone.”

Despite the ongoing challenges, there are opportunities for grocers to make the most of the current conditions, including creating recipes for consumers that reflect these changes, for example.

“I think we will continue to have both inflation and supply constraints, especially as we are continuing to see COVID-19 play a heavy role in the state of the grocery industry and consumers’ lives,” Connors said. “As a result, it will mean that people will continue to be financially constrained for multiple reasons. There is an opportunity and a responsibility for retailers and brands to help customers make the most of their dollars and be able to put nutritious meals on the table for their families.”