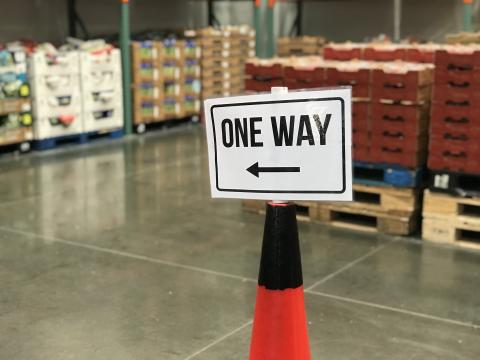 Social distancing measures such as directional signing (shown above at Costco) have become commonplace at retail.

The real retail apocalypse is underway. March retail sales were horrific for most retail sectors except grocery and other essential operators and April is likely to be worse as the full effects of a national lockdown are felt.

Total retail sales saw their biggest monthly drop on record during March as the nation sheltered in place to slow the spread of COVID-19. The only sector that stood out as positive was the grocery channel, up a robust 25.6%, while apparel led the declining segments down 50.5%. The U.S. Census Bureau said overall retail sales during March were down 8.7% seasonally adjusted from February and down 6.2% unadjusted year-over-year. The monthly drop is the largest ever recorded, exceeding a 4.3% decline in November 2008 amid the Great Recession.

The declines were hardly unexpected following widespread store closures designed to slow the spread of a deadly virus. However, many of those closures didn’t occur until mid-March which is why the outlook for April sales and the viability of retailers in several sectors is especially concerning.

“March was a month that started out with many stores still open, but far more are closed now,” said National Retail Federation Chief Economist Jack Kleinhenz. “Don’t be surprised if the data going forward shows a worsening situation. Even if the economy begins to reopen in May, consumer behavior may take a long time to adjust. The road to recovery could be long and slow.”

The words “long and slow,” is not how anyone in retail wants to see the trajectory of an economic recovery described, especially retailers who were already marginal performers in hard hit sectors like apparel and home goods

Clothing stores saw the biggest decline among categories counted by both NRF and the Census Bureau, with sales down 50.5% from February, while furniture store sales were down 26.8% and sporting goods stores were down 23.3%. In addition to gains in grocery, general merchandise stores – which include warehouse clubs, increased 6.4% and health and personal care stores, which include pharmacies, increased 4.3%. With more people turning to ecommerce, online and other non-store sales were up 3.1%.

NRF’s calculates retail sales differently than the Census Bureau – excluding automobile dealers, gasoline stations and restaurants – so its numbers show a 1.7% gain in March, seasonally adjusted from February and up 4.5%, unadjusted year-over-year. The difference between the Census Bureau and NRF numbers is because the categories NRF excludes saw some of the biggest hits. In addition to bars and restaurants being closed, gasoline sales were affected both by fewer people driving and lower gas prices while auto dealers were among those affected by stay-at-home orders, according to NRF.