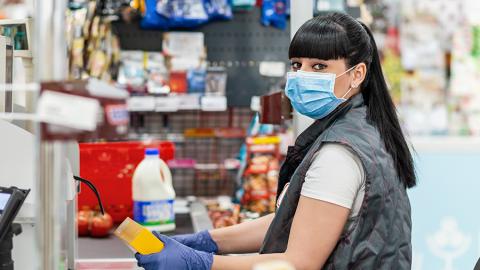 Retail CEOs don't want all the pressure for mask enforcement to fall upon their workers.

As some consumers continue to rebel against the wearing of masks, some of the nation’s leading retail leaders are calling for mask mandates in all fifty states.

In a piece published on CNN Business, 21 retail CEOs called on U.S. governors “to prioritize the health and safety of our workers and the communities we serve by requiring patrons to wear a mask when visiting our stores.”

The call — basically an open letter — comes as many states and regions report fresh coronavirus spikes, and as concerns spread about more deaths and more economic damage. “This simple requirement, along with the social distancing measures and sanitization protocols we have implemented in stores, is the best way to minimize risk and dramatically reduce the spread of Covid-19,” those retail leaders said in calling for new mask mandates.

It’s dim entertainment during this time of pandemic, all those viral videos of retail employees and customers dealing with the outbursts of people who refuse to wear masks inside stores. Mask rage appears to be growing in the U.S., and there is reason to believe that the situation could get worse in the coming weeks, thanks in part to summer heat. As that happens, many retail chains have set their own mask requirements for shoppers. Still, some states are resisting mask mandates, officially at least — the most recent example being Georgia, where Gov. Brian Kemp, a Republican, signed an executive order forbidding cities and counties from setting their own mask mandates.

The letter from the 21 retail executives (a list of them follows below) mentions the frustration that retailers deal with when dealing with consumers who refuse to wear masks, and the risks involved.

“In mandating the use of masks in public settings, the role of enforcement should not fall upon our employees, team members and associates,” the open letter reads. “Requiring retail employees to serve as de facto law enforcement could lead to an unsafe environment for our employees and customers. All retailers will do our part to clearly communicate such policies to our employees and the public, but it must be the role of government to properly enforce this important safety initiative, and it must be the responsibility of every individual to follow the law.”

The retail leaders paint a picture of what could happen if the nation’s governors do not step up and require masks to be worn by people who are in public and shopping.

“Without government leadership, a small, but meaningful, segment of customers will continue to disregard private-sector warnings, placing themselves and others in harm's way by shopping without a mask or face covering,” the letter said. The retail leaders who signed their names to this letter did thank those governors who have “have led on this issue, putting safety first and requiring individuals to wear a mask when shopping.”

The signers of the letters are: