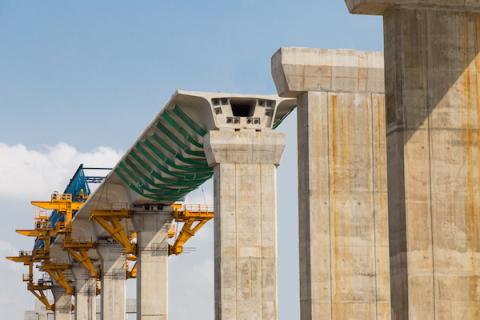 When Biden announced his ambitious infrastructure plan, The American Jobs Plan, at the end of March, it was met with excitement about modernization, but also opposition to proposed tax hikes and the president’s wider definition of infrastructure. The plan costs roughly $2.3 trillion and is full of wide-ranging initiatives to overhaul American infrastructure with a huge economic impact. With such lofty goals, the retail industry is lobbying for its chance to have a say in the final bill package.

Retail is one of the biggest industries that depends on quality infrastructure. From imports and exports around the world, to stocking stores with supplies and making home deliveries for online orders, retail revolves around roads, bridges, ports and airports. There’s a revenue impact business case for retailers, too, as it’s anticipated the average U.S. household will lose $3,400 annually in disposable income due to infrastructure deficiencies over a 10-year period, according to a 2019 report by the International Council of Shopping Centers linking infrastructure to retail success.

Biden’s infrastructure plan--still in an outline, goal-oriented format--includes areas not typically covered in previous infrastructure packages, such as home health care, child care, broadband and others critical services that aren’t nationalized in the U.S. When it comes to agreeing on a package and financing details, this definition of infrastructure is where Republicans and Democrats are disagreeing.

“Part of the debate right now is what accounts for infrastructure,” Andy Harig, vice president of tax, trade, sustainability and policy development at food retailer industry association Food Industry Association (FMI), told Retail Leader. “There seems to be, among Republicans, the traditional call for roads, bridges, ports, [whereas] President Biden has a more expansive view of infrastructure.”

Also at issue in the plan is how to pay for it. Biden and Democrats are pushing for higher corporate taxes, in a reversal from the Trump-era 2017 tax breaks. Republicans, as well as retail industry associations, see taxes as a red line not to be crossed. Optimism is still running high that a deal could be struck and a bill passed by Congress to address the dire infrastructure needs of the nation.

One of the biggest problem areas in need of investment for the retail industry is U.S. ports, which are backed up due to surging volume since the start of the pandemic, but also outdated infrastructure. A temporary blockade in the Suez Canal (which carries around 13% of global maritime trade)--after the cargo ship Ever Given was lodged in the side of the canal--also created delays that impacted the retail industry and illustrated how challenged infrastructure creates supply chain vulnerabilities.

However, all areas of infrastructure are desperate for modernization.

“For us, the biggest [issue] is congestion at the nation's ports and on the rail systems,” Jon Gold, vice president of supply chain and customs policy with the world’s largest retail association, National Retail Federation, told Retail Leader. “[There are] ongoing issues with bridges and highways. Most folks would say our infrastructure as a whole is failing.”

Fortunately, the demand for infrastructure improvements are pretty much universally agreed upon, and the issue has previously been an area of bipartisan agreement on Capitol Hill, as well. A 2021 rating from the American Society of Civil Engineers grades the U.S. infrastructure as a “C-,” well below the quality of infrastructure among nation peers. The U.S. has lagged behind in infrastructure investment for years, which will also make moving forward a long-term process.

“Now we’re in a situation where we need to do the basic maintenance on bridges, roads, rail, but we also need to make investments in modernizing and bringing them into the 21st century,” Harig said. “I'm talking about shipping and how we move products throughout the country. There are separate issues on individual transportation that impacts us, too. How customers get to the store. Those all impact our business model.”

Pushing Back Against Taxes

Where the retail industry associations disagree with the Biden administration is over how to pay for an infrastructure overhaul. Biden’s plan, which clocked in at a cost of around $2 trillion, includes a corporate tax hike to finance new investments. FMI and NRF both argue this is a wrong move, and instead are pushing for user fees, which are paid in order to access services or facilities. The retail industry would be a big user of many types of new infrastructure.

“If you raise the gas tax, the mileage tax, it would be taxed on the miles you drive,” Harig said. “I think it's going to be a challenge. [There will be] lots of groups taking a haircut and contributing to this. I don't think our industry would say no [to contributing], because we're gonna benefit from this. But we want to make sure it's done in a way that's fair, that’s across the board and everyone has skin in the game that reflects the border economic situation in the country.”

However, user fees and tolls likely won’t be enough to foot the bill. One study from the Tax Foundation found highway user fees and user taxes only made up for 50.4% of state and local expenses on roads nationwide. When looking at other modes of transportation, none were free of government subsidy. In addition, raising user fees and gas taxes to pay for road and infrastructure repairs are often unpopular policies.

For FMI, the viewpoint is that retailers have already been hit hard by the COVID-19 pandemic. Food retailers alone spent an additional $24 billion in pandemic-related expenses since March 2020, including billions in higher pay, cleaning and sanitation and new technology and online delivery expenses, a recent FMI report found. Heaping on new taxes now would be detrimental to retail businesses, the association says.

“If you hit those blanket, across-the-board taxes, whether the corporate or individual tax rates go up, you start to see people make changes in how they invest in their communities or upgrade the experience in the store,” Harig said. “I don't think anyone will object to contributing to the process. It’s about just making sure it's fair.”

While associations are lobbying against Biden’s tax proposals, there is still optimism for an infrastructure deal. With such a dire need, it’s likely that Congress will pass a package in some form.