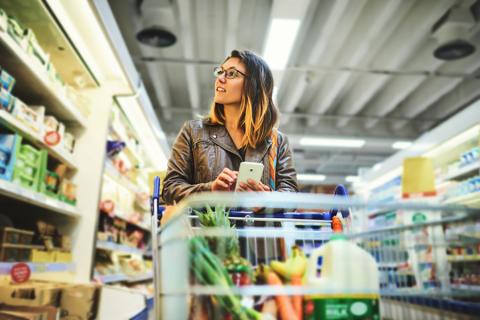 Retailers might be itching to reopen their stores, but consumers still don’t feel safe inside them, at least according to new survey findings from Deloitte that paint a picture of shopper attitudes during the ongoing COVID-19 pandemic.

Only 34% of U.S. consumers feel safe enough to shop inside stores now, according to the new “Deloitte Global State of the Consumer Tracker” survey report. Deloitte drew its findings via surveys of 1,000 consumers in the U.S., along with similar surveys in 12 other countries, during the week of April 13, 2020.

“Health concerns generally exceed financial concerns in the U.S., with more than 50% of respondents concerned about health and nearly one-quarter of respondents worried about finances,” Deloitte said.

But people need to eat and buy other products at retail stores, so those safety concerns among U.S. consumers could spark more growth for e-commerce and mobile orders, delivery and curbside pickups. As one might expect, “Millennials lead the online shopping charge in the U.S. predominantly with in-store categories such as groceries, everyday household goods and alcohol,” Deloitte said. It’s a good bet that other types of consumers will emerge from this pandemic with more willingness to use such shopping methods, though, given that habits more or less forced on shoppers during these tense times will have a good chance of sticking.

Food retailers and other businesses are taking steps to not only protect their workers but encourage customers to take all possible pandemic protections. Stop & Shop, for example, recently launched an ad campaign calling on consumers to step up their safety efforts while shopping. As for the Deloitte report, it found that, in general, spending likely will continue to increase on groceries and household goods – indeed, several retailers, including Target and Costco, have recently reported revenue gains thanks in large part to pandemic shopping, especially for e-commerce.

But future gains are not guaranteed for all retailers and product categories. “With stay-at-home orders still in effect for many, more discretionary categories such as travel and automobile fuel are easy categories to eliminate from the consumer’s current budget,” the report said. “However, if economic impacts continue to drag on, consumers are likely to start adjusting their less discretionary spend as well.”

Already, the report found, consumers are planning to decrease spending on furnishings, alcohol and electronics, among other retail product categories. “As isolation measures start to relax, the extent to which purchase intent fluctuates for more discretionary items may be a good indicator of pent-up demand in each market going forward,” Deloitte said. “Either way, it will likely be useful to watch as confidence returns over the coming weeks.”