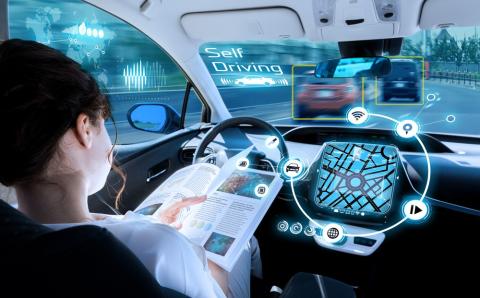 Last-mile solutions are right in front of retailer's noses, as another self-driving start-up offers its own last-mile option.

Last-mile solutions are right in front of retailer's noses, as another self-driving start-up offers its own last-mile option.

According to Fast Company, self-driving startup AutoX–with a backup driver inside–will pull up with your order in the trunk. In the backseat, the window rolls down to offer a shelf of extra food to buy. Grocery stores using the system could begin to shift to warehouses rather than retail stores, helping save cost. For consumers, it could potentially be cheaper than driving to a store to shop themselves.

“Last mile delivery for grocery and food will be faster and cheaper enabled by self-driving cars,” says Jianxiong Xiao, Chief Executive Officer of AutoX. The vehicle is equipped with high-resolution cameras to spot pedestrians or pets in the road–a system that Xiao, who trained at MIT’s Computer Science and Artificial Intelligence Lab, says works better than Lidar laser arrays and other sensors used on other self-driving cars, but is cheaper to build. “Fully outfitted, the car costs $80,000 and can operate for several years; if regulations and technology get to the point that the backup driver isn’t necessary, that will be cheaper than a regular car with a human driver.”

According to Fast Company, while other autonomous delivery companies like Nuro, with a cute toaster-shaped van, or Marble, with a sidewalk delivery robot, are designing vehicles customized for delivery, AutoX is adding its technology to existing cars.

Nuro, maker of the world’s first fully unmanned road vehicle, partnered with Kroger to offer same-day delivery via its fleet of autonomous vehicles. The company has selected Scottsdale, Ariz., as the first test city for its self-driving grocery delivery pilot.

According to Fast Company, a handful of states, including California, Arizona, Texas, and Nevada, have set up or are in the process of setting up legislation to support tests and deployment of fully unmanned vehicles. Xiao believes that it will only take one or two years to commercialize fully unmanned delivery in some locations.