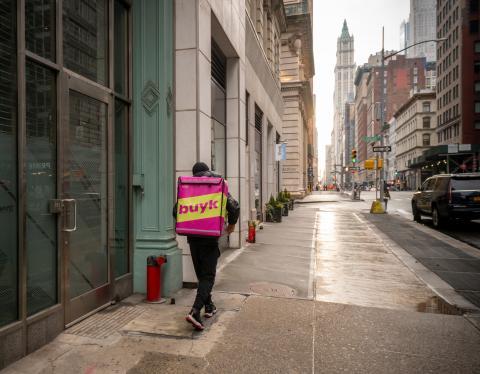 Buyk, a Russia-funded startup that promises grocery delivery in as little as 15 minutes in select cities, has been impacted by sanctions against Russia. The company furloughed its CEO, James Walker, and 98% of its employees earlier this week, The New York Post reported. In addition, employees were told their paychecks from the previous two weeks were only able to be fulfilled if the company found emergency funding or a buyer.

“Our founders Slava Bocharov and Rodion Shishkov have been providing bridge financing to Buyk until we close our next investment round,” Walker said in an announcement to news outlets. “However, the restrictions [Russian President Vladimir] Putin has imposed in response to U.S. sanctions have made this bridge financing setup untenable, despite neither of our founders being sanctioned.”

The future of the company is unknown, and it’s possible Buyk will raise American dollars, sell itself or declare bankruptcy, The Post reported. Shishkov founded Buyk last year as a spin-off of Russian delivery app Samokat, which is partially owned by sanctioned state bank Sberbank, according to The Post. The company’s Russian ties and funding have become untenable as severe sanctions have intended to cripple Putin’s economy as he wages war against neighboring Ukraine.

The company’s presence in the U.S. happened at a time when third-party delivery services are high in demand. More service providers, from Gopuff to DoorDash, are offering a wider assortment of products delivered at faster and faster rates. Foreign companies are also expanding their reach in the U.S. and elsewhere, increasing the competition for speed among these apps.